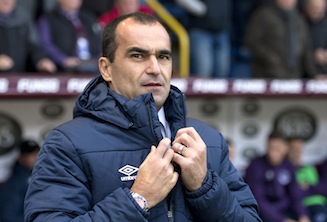 Keane has suggested that players such as full-back Seamus Coleman and midfielder James McCarthy have been put under pressure by Everton to protect themselves on international duty.

The former Manchester United captain said that Everton gave the impression that their Irish players were “barely able to walk”.

But Martinez told a press conference on Thursday: “It is completely nonsense. We have a good relationship with (Ireland manager) Martin O’Neill and we keep in touch frequently and share information.

“A lot has been said; a lot is nonsense. The reality is the conversation between managers of the associations and ourselves has been good and will continue to be.”

The Spaniard added: “All the fans in the Republic of Ireland and other nations should know these players will give their lives to represent their countries and that is something we are very proud of.

“Seamus, Darron (Gibson), James and Aiden (McGeady) have been extreme professionals and that is something we will carry on seeing.”

McCarthy was sent home from the Ireland camp due to a hamstring problem during the international break, without playing a match.