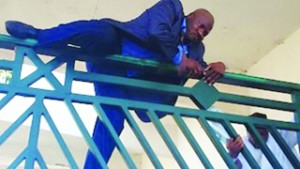 •Hon Kawu Sumaila, Deputy Minority Leader of the House of Reps, climbing NASS gate to have access to the premises today

The sprawling premises of National Assembly in Abuja, Nigeria’s capital, was thrown into chaos this morning as officers of the Nigeria Police Force and State Security Services tried to stop the Speaker of the House of Representatives, Honourable Aminu Tambuwal, and other legislators  from gaining access into the Assembly’s chamber.

The effort, however, failed as the Speaker was eventually smuggled into the chamber by lawmakers who are his loyalists, though with a lot of drama.

Some of the legislators scaled the locked National Assembly gate to gain acces and th epolice responded by shooting teargas to disperse them.

In an early indication of what to come, a large contingent of SSS and police personnel had early Thursday morning been deployed around the expansive complex.

Because of the security cordon around the complex, the law enforcement officers proceeded to seal off all entry points to the National Assembly,  leaving only one open which ensured that all those who wanted to gain entry are thoroughly searched.

Trouble began when Tambuwal  arrived and sought to drive into the Complex, but was stopped by the police.

The Speaker, who was accompanied by other lawmakers who are his loyalists, mostly members of the opposition All Progressives Congress, APC, then alighted from his vehicle trekked from the gates to the main complex, a distance of over 500 metres amid a hail of teargas by the police.

It was gathered that following a long argument, some lawmakers came out of the Assembly, broke the third gate and brought the speaker inside the chamber. Some APC lawmakers who were barred from driving in through the third gate were also seen scaling the fence to gain access into the National Assembly Chamber.

However, it was not clear if the House plenary session convened to consider the extension of the State of Emergency.

P.M.NEWS gathered that Senate President David Mark led some Senators into the lower chamber in solidarity with the Representatives.

P.M.NEWS had on Tuesday reported that there was anxiety among members of Nigeria House of Representatives as the lawmakers were set to reconvene Thursday  to consider a request by President Goodluck Jonathan to extend emergency rule in Borno, Adamawa and Yobe states.

“On Tuesday, 18th November 2014, I received a communication from the President, Commander-in-Chief of the Armed Forces, Dr. Goodluck Ebele Jonathan GCFR, requesting for the extension of the existing State of Emergency in Adamawa, Borno and Yobe states by the House of Representatives,” Tambuwal said in a statement while announcing the reconvening of the House.

“Pursuant to the powers conferred on me by Section 305 (2) of the Constitution of the Federal Republic of Nigeria 1999, which requires me to ‘forthwith convene or arrange a meeting of the House’ and in order to treat the extension before the expiration of the current State of Emergency in accordance with Section 305 (6) (c) of the Constitution, I hereby reconvene the House of Representatives…,” he added.

The House had adjourned on 28 October immediately after Tambuwal, the Speaker announced his defection to the opposition All Progressives Congress from the ruling Peoples Democratic Party.

The House was scheduled to resume on 3 December and it was believed that the long adjournment was to avoid potential backlash over the defection from majority PDP members of the House.

Members of PDP led by President Goodluck Jonathan and Adamu Muazu, the chairman of the party, had met with PDP caucus of the House after the defection on the possibility of removing Tambuwal from office as a punishment for the defection.

The Speaker whose security details have been ordered withdrawn by Suleiman Abba, the Inspector General  of  Police, following the defection has filed a suit to stop his removal by the PDP caucus of the House led by Deputy Speaker, Emeka Ihedioha.

P.M.NEWS learnt that members of the House were anxious over speculations that the Presidency, which is still smarting from the defection of the Speaker, may employ extra constitutional means to stop Tambuwal from presiding when the House reconvened on Thursday.

It was believed that the move to stop the Speaker from entering the National Assembly on Thursday was in furtherance of the move by the PDP using the police to remove him.

President Jonathan met with the the Senate President and the Deputy Speaker behind closed doors at the Aso Rock presidential villa on Tuesday.

Though both men refused to speak to the press after the meeting, it was believed that the issue of the state of emergency as well as the defection of the Speaker were the main topics of the meeting.