Students Cry Out Over Campus Cultism 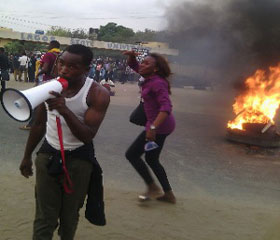 Findings by our correspondents have revealed that they have started operating on campuses at  quite brutal level.

A member of the newly elected Students Union Government (LASPOTECH), who pleaded anonymity, told our reporter that the activities of cultists in his school are taking a turn for the worse and feared the situation may soon get out of hand if the school’s management which he accused of sponsoring their activities within and outside the school premises, failed to do something urgent about it.

He said: “The security in LASPOTECH is nothing to write home about.

“I will like to call the attention of Lagos State Government, Lagos State House of Assembly, security agencies and the general public to the activities of agents of darkness (cultists) inside and outside the school vicinity.

“I will also like to inform you that this cultists are being protected, preserved, defended, aided, financed and promoted by the school management.

At least 80% of the people in the school community belong to one secret cult or the other which is a threat to life and properties of students.

“Sadly, students are intimidated, harassed, molested and threatened before the school security personnel and nothing is done as regard to that.

“As a victim of security threat  (I was beaten blue black by some cultists) I will like to recommend the service of Ikorodu community Vigilante group known as ONYABO in LASPOTECH to avert subsequent security threat.

“Furthermore, I will like to address parents or guardians sending their children to the school to please check the activities of their children/wards.”

In a chat with our correspondent, a senior lecturer defended the allegation levelled against top management staff of the institution as a cheap blackmail and unfounded lies from the pit of hell.

“The guy may have personal problems with the authorities. Security has improved tremendously under the new Rector. The new Rector has zero tolerance for cultists and cult related issues.

“In fact, the school has just reinforced its effort by getting the services of a new security outfit.

“There are no more cultists in LASPOTECH. What we have left are just hustling gangsters and the school is doing everything to contain and curtail them. As regards outside the campus premises, the school is working hand in glove with the landlords associations to ensure security of life and property.

Some students also bared their minds on cult-related activities in and around their schools as something to be worried about if something is not done.

A student disclosed that “cultists’ activities in my school have reduced and they work underground like extorting students. The authorities are really trying to curb their acts and I advise they do more because some students are dying in silence from threats.

“Several times students are harassed right in front of the school gate and the security guauds did not rise to the occasion. I will strongly advice my school to create a body to monitor students’ interaction with other students to fish out cultists.

A student who schools at the Kogi State University, KSU noted that “the cultists in my school are so brutal and destructive. They carry out robbery without fear. Cultism is at its peak here.

“Many times we get attacked on the road, it is always unsafe to walk or even move around at night.”

A student of Olabisi Onabanjo University, OOU, Kosenikan Akorede Omotayo, submitted that, “Cultism is a menace that has eaten deep into our educational sector, it has also sent many souls to their early graves.

“For me personally, when you are not affiliated with them, they don’t just wake up in the morning and start planning how to harass a student or cause mayhem within and outside the school.

“When you don’t have any business to do with them it is often very easy to cope. I cannot categorically tell you how brutal they are because I have not been an eye-witness anytime they start causing mayhem.

“But we have heard many instances where they harass students, especially when they want to extort money from you and if you are not ready to give them, they can be very brutal. Also when two factions are fighting for supremacy.

“The school authority is doing everything humanly possible to curb cultism and stop cultists from harassing their fellow students by providing patrol vans for the security guards.

Adediran Samuel, a student of Obafemi Awolowo University, OAU, said: “As you already know, OAU is one of the most peaceful campuses in Nigeria (if not the most peaceful). You must know about the massacre that happened on OAU campus sometime in July 1999 when some cult members killed many students. Since then, OAU has been relatively safe.

“The students union and the school authority worked to reduce their presence to the minimum. Although we still hear about cult groups being on campus, none is brave enough to show that they are members because they fear what students might do to them.”

P.M.NEWS Campus Square gathered that trouble started when the students were writing their exams on Saturday and the invigilator caught one of the students was cheating and ordered him to stand up.

The student was alleged to have told the invigilator that if he dared come close to him, we would waste him.

The invigilator thought he was joking and as he moved towards the student, he brought out a gun and shot him.

The action of the student whose identity and the name of his cult members could not be ascertained drew the attention of a rival cult group who quickly mobilized themselves and there was a fight during which many students were injured.

Policemen from Abattoir, Oko-Oba Division and Area ‘G’ Command helped to restore peace in the school.

The following Sunday evening, an aluminium dealer, 23-year-old Taiwo Kareem, was shot in the neck by the cult members in front of the school and the assailants fled. He was taken to the hospital for treatment.