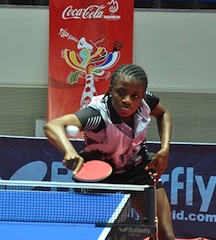 The 46th edition of Asoju-Oba Cup Table Tennis Championship will  begin on Monday at the Indoor Hall of Teslim Balogun Stadium, Surulere, Lagos.

Speaking at a press conference yesterday in Lagos, the cup donor, Chief Molade Okoya-Thomas said he was happy that the championship had produced a lot of stars that had represented the country both in continental and international championships.

Okoya- Thomas, who commended Lagos State Government for its commitment to grassroots sports development in the last few years, disclosed that he will continue to sponsor the tourney until it pleases God to allow it to stop.

“I will continue the full running costs and since I am Asoju Oba myself, it is hoped that the name Asoju Oba Table Tennis Competition will remain till when it pleases God to allow it to stop,” he said.

Meanwhile, a total of 22 titles will be at stake and the competition is in three categories; Cadet, Intermediate and Seniors for Singles, Doubles and Mixed-Doubles and the Sportswriters. Also, there will be Para- Table Tennis featuring this year tourney.