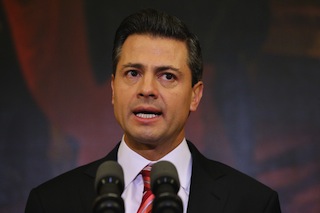 Mexico’s beleaguered President Enrique Pena Nieto made public all his personal assets Wednesday as he struggles to quell a furore over a mansion his wife bought from a government contractor.

He acted two days after his wife Angelica Rivera said she would sell the $4 million house to try to end the uproar.

Criticism of the mansion has been an extra headache for Pena Nieto. He is struggling with protests over the government’s handling of the presumed massacre of 43 college students by a gang in cahoots with corrupt police in the southern state of Guerrero.

On Wednesday the president said he owned four houses and an apartment. The most expensive property is worth about $400,000, he said.

“With the goal of winning society’s trust, I have decided to make public all of my personal assets,” said the president, who had already revealed part of that wealth.

He was given two of the houses by his father, while the apartment was inherited by his first wife, now dead, said the asset sheet published on the web site of the Mexican presidency.

The president owns four lots of land, which he said were also gifts from his parents. Altogether they are worth about half a million dollars.

The president earns the equivalent of 250,000 dollars a year.

He also declared art works, jewelry and watches that were either gifts from his parents or inherited from his late first wife.

Also, he has bank accounts and investments worth about a million dollars.

In a bid to end the controversy, Rivera, a former soap opera star, issued a video statement late Tuesday explaining how she bought the house in a posh Mexico City neighborhood.

She said she was giving up the house, which she said she bought with her Televisa television earnings. She declared $10 million in taxable revenue in 2010.

Rivera released a January 2012 real estate contract — six months before Pena Nieto was elected — showing she agreed to pay $4 million for the house over eight years at an interest rate of nine percent.

Rivera acknowledged that the house was built by a subsidiary of a government contractor after she told the firm’s owner, Mexican mogul Juan Armando Hinojosa, that she was looking for a new property.

Revelations about the “White House” were made last week by prominent journalist Carmen Aristegui, who said the house was built by a subsidiary of Grupo Higa, a company headed by Hinojosa.

Grupo Higa had won lucrative public works contracts when Pena Nieto was governor of the state of Mexico. Earlier this month, it was part of a Chinese-Mexican consortium that won a $3.7 billion bullet train contract.

But three days before the Aristegui report came out, Pena Nieto abruptly cancelled the train deal, putting him in an awkward position as he travelled to summits in China.

The government said it wanted to avoid any questions about transparency after the opposition raised questions about why only one group, the one led by China Railway Construction Corp., had bid for the contract.