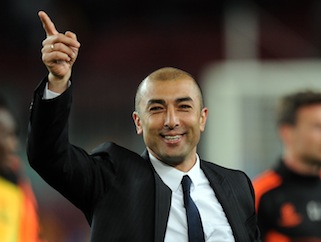 Roberto di Matteo’s Schalke hope to end Wolfsburg’s eight-match winning streak in the Bundesliga on Saturday in their final warm-up before hosting his former club Chelsea in the Champions League.

Second-placed Wolves are unbeaten in their last 10 games and are targeting a seventh straight Bundesliga win at Schalke’s Veltins Arena with the Royal Blues 11th in the table.

Di Matteo has so far refused point blank to talk about Chelsea, who sacked him in November 2012 just six months after he had steered them to the Champions League title as caretaker coach.

Schalke are second in their Champions League group, three points behind leaders Chelsea, having earned a goalless draw at Stamford Bridge in September and host Jose Mourinho’s side on Tuesday.

The 44-year-old Di Matteo has won all three of his home games since taking charge last month, but Wolves is his biggest test and his side are just one place higher in the league than when he took charge.

“I don’t know if there’s a favourite for this game, but for sure we’re the home team and we’ve got to take the initiative,” said Di Matteo.

“Wolfsburg has a very good record and they have a lot of quality in their squad, which is well balanced.

“They have a stable defence, conceded few goals and are very good on the counter-attack.”

Di Matteo will be without suspended defender Denis Aogo, forward Jefferson Farfan is out with a knee cartilage problem while midfielder Julian Draxler and defender Sead Kolasinac are on the long-term injured list.

He has potential problems looming in January as both Cameroon internationals Eric Choupo-Moting and Joel Matip will be involved with the Africa Cup of Nations (from January 17-February 8).

Japan defender Atsuto Uchida is also set to miss most of Schalke’s winter training camp because of January’s Asian Cup, hosted by Australia, before the Bundesliga resumes on January 30.