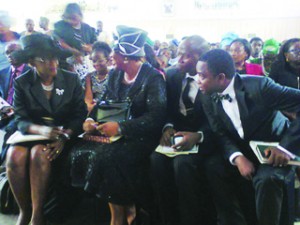 The judges were sworn in at the Adeyemi Bero Auditorium, Alausa, Lagos, Southwest Nigeria in the presence of thousands of well wishers.

Speaking, Fashola charged the judges to exhibit high sense of morality by administering justice with fairness and firmness.

He said as judges, they must live above board and shun corrupt practices so as not to tarnish the reputation of the judiciary.

Also speaking at the event, Commissioner for Justice and Attorney General, Ade Ipaye, said the appointment of the judges was met with much expectation by the public and others.

He said the powers conferred on Judges of the High Court were very wide, as they extended to all matters between persons or between government or authority and any person in Nigeria.

Ipaye stated that recent vacancies in the Lagos State judiciary had necessitated the search and intensive screening of suitable qualified candidates to fill the positions, adding that this was what led to the appointment of the new judges.

Chief Judge of Lagos State, Oluwafunmilayo Atilade, said the appointment of the four new judges brought to 54 the total number of judges in Lagos State, comprising 39 female and 15 male.

She appealed to the state government to appoint more judges as the number of cases in court were overwhelming.

Atilade said she believed in the ability of the new judges to deliver and live up to expectations in the performance of their duties.

She charged them to be focused, diligent and exhibit high sense of maturity, ensure that justice was done in handling cases and to be above board.