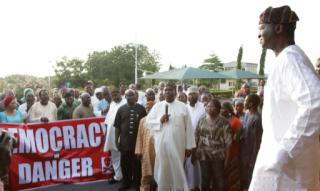 The protesters were particularly bothered about what they described as the brigandage that happened both at the National Assembly and the Ekiti State House of Assembly on Thursday.

While seven members on the platform of the Peoples Democratic Party, PDP, sacked the Speaker of the Ekiti State House of Assembly, Adewale Omirin, and other principal officers of the House with 26 members and the police allegedly holding the National Assembly hostage locking out Speaker Aminu Tambuwal and all those deemed to have sympathy for him during a sitting of the House to deliberate on the request for the extension of emergency in three Boko Haram-infested states of the nation.

Many Nigerians have also described the two incidents as a disgrace to the country as members of the House of Representatives had to take on every opportunity even scaling the fence into chamber while police officers shot tear gas canisters at Speaker Tambuwal and his supporters.

The lawmakers embarked on the protest march after a special parliamentary sitting in solidarity with the sacked principal officers of the Ekiti State House of Assembly and other members on the side of Omirin.

The House cut short its recess to meet, resolve and cry out against the tension-filled political situation in the country and its consequences if not urgently addressed.

P.M. NEWS reports that the 19 aggrieved members of the Ekiti Assembly were at the sitting held by their counterparts at the Lagos Assembly and had the opportunity to state their position.

Receiving a letter expressing the protester’s grievances from Speaker Adeyemi Ikuforiji of the Lagos State House of Assembly, who led the protesters, Governor Fashola said the two incidents had given him sleepless nights since their occurrences.

Fashola, who noted that it was unusual to see Lagos lawmakers openly protesting, noted that the crises in Ekiti and the National Assembly were the result of partisanship and interests, but said this was the time for President Goodluck Jonathan to wake up and save the country’s democracy.

“It is very unusual thing to see member of the house protesting like this, though we disagree but not in opposite side. We have made a clear choice in a way in which we want to be governed.

“I share your concerns and every person who is concerned about Nigeria should also be worried about the situation in Ekiti assembly and the national assembly.

“I think Mr. President has a moral duty to the country. He should not be a leader of a side,” he said.

While expressing the complaints of the protesters earlier, Speaker Ikuforiji said it had reached a stage where Nigerians must cry out against the attempt by some people to truncate the country’s democracy.

According to him, the signs that Nigeria’s democracy is in danger had become too obvious for the citizens to keep silent.

“We are here to express our grievances about the political situations in the country especially about the Ekiti impeachment and the recent fracas in the National Assembly.

“We are fully with the lawmakers; all hands must be on deck to save Nigeria’s democracy. The 16 years experience of democracy in Nigeria is the longest since Independence and such experience should not be allow to destroy like that.

“Its the duty of every citizen of the country to defend our democracy and that is the reason why we had a special sitting today for the Ekiti lawmakers to express their view to the public.

“We want the governor to convey our grievances to the President over the situation in Ekiti and the legislative arm of the National Assembly,” he said.