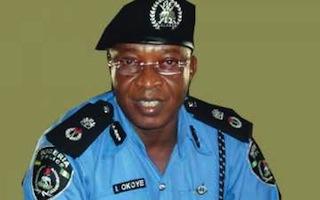 Nemesis caught up with some suspected kidnappers who have been terrorizing Ogun state as men of the Special Anti-Robbery Squad, SARS, Ogun State Police command arrested five suspected members of the group.

Among those arrested by the police crack team is an ex-soldier, Akinyele Jaiyesinmi.

Parading the suspects on Thursday evening at the Police headquarters in Abeokuta, the State Police Commissioner, Mr. Ikemefuna Okoye, said the arrest was a breakthrough for the command and a setback for the syndicate which he said had been responsible for the recent spate of kidnappings on Ijebu axis of the state.

Okoye said two operational vehicles, an Astra Opel and Renault car, including arms and ammunition were among the items recovered from the suspects.

He said: “Weapons recovered from them are; two double-barrelled guns loaded with cartridges, expended cartridges and assorted charms.”.

Okoye disclosed that SARS led by Mohammed Tijani, had placed the syndicate on surveillance shortly after the Ojude Oba festival last month, before it swooped on their hideout at Ijebu Ode on Monday 10, November, 2014.

“They opened fire on our men when they got to their hideout. A shootout ensued and four members of the syndicate, including a woman fell to the superior firepower of our men. But we were able to arrest five of them, while some others are still at large.

“From their confessions, they said that they were responsible for the kidnap of the mother of Hon. Remmy Hazzan, a member of Ogun State House of Assembly at Omu Ijebu few month ago and they disclosed that they collected N1m ransom before she regained her freedom,” the CP revealed.

Corroborating the statement of the Police boss, one of the suspects, who is an ex-soldier, disclosed that he was in the service of the Nigerian Army up until 2004 before he was dismissed.

He told newsmen about some of the operations they have carried out and disclosed that they collect ransom from their relations before they were released.