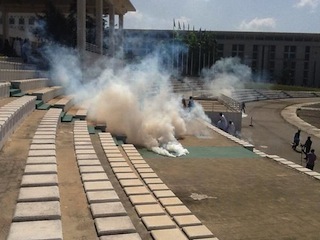 Tear gas in the Assembly premises

Nigerians have expressed total dismay and outrage over Thursday’s invasion of the National Assembly, Abuja, by policemen and State Security Service personnel.

Hundreds of policemen barricaded the gates of the National Assembly on Thursday, shutting out House of Representatives members, including its Speaker, Aminu Tambuwal.

They were prevented from going into the chamber to vote on whether to allow emergency rule to continue in the troubled northeast Nigeria.

Canisters of teargas were released by the police to disperse the lawmakers who forced their way into the chamber. Some of the lawmakers scaled the gate of the Assembly to gain entry.

The incident has become a national and international embarrassment to Nigeria.

Reacting to the shameful episode, many Nigerians expressed anger and accused the Presidency of depoling policemen to harass the lawmakers.

Ashafa, who described the act as undemocratic and provocative, called on the Federal Government to leave Tambuwal alone so as to concentrate on his constitutional duties as the Speaker of the House.

“It’s unfortunate that despite the fact that we claim to be practicing democracy, we still find ourselves practising despotism at the highest level in this country. Hon. Tambuwal has chosen the path he thinks is best for him and his people by joining the All Progressives Congress. And instead of the ruling party to concentrate on its constitutional responsibilities; it keeps frustrating the innocent Speaker.

“Just few weeks back after the lawmaker decamped to APC, his personal security aides were withdrawn. It is high time the ruling party called the law enforcement agencies to order so as to curb any form of molestation to the person of Hon. Tambuwal and his office in future,” he said.

Reacting, the Afenifere Renewal Group (ARG) warned against the use of state security agencies to perpetrate any party’s political agenda as was the case when mayhem rocked the National Assembly on Thursday.

Wale Oshun, ARG’s Chairman, said “there appears to be an implicit intent to disintegrate this country and it appears that this is being perpetrated with the use of tax-payer-funded security agencies.

According to him, “we have recently experienced abuses of the judiciary. Now it appears the next tranche is an abuse of the legislative arm of government. The question is which arm of government is next? ARG needs to warn that where institutions fail to function in support of good governance, then such a nation is on the brink of collapse.

“Just some days ago, police in South Africa were at loggerheads with South African members of parliament for absolving President Zuma of allegations of using public fund to develop personal property. That is an example of a country where institutions function accordingly unlike in Nigeria where everything is tied to the President’s apron strings.”

Oshun said those perpetrating these were inviting “us to return to the trenches, and this time, we will fight the battle that will actualise our vision of and for a Yoruba Nation. ARG will continue to agitate for a true federal structure as a way out of this chaos as what we are experiencing is one of the many negative consequences of an over centralised federal system that has proven to be a hindrance to our development as a people.”

Also, the Conference of Nigerian Political Parties (CNPP) after an emergency meeting on Thursday condemned in strong terms what it described as “the brigandage and rascality of the Nigeria Police Force as evidenced with the desecration of the National Assembly NASS today.”

It said in a statement, “CNPP is yet to understand the motive behind the violence unleashed by the Nigeria Police Force, on honourable members of the House of Representatives, in utter violation of the core mandate of the police to protect and defend the people and the laws of the land.”

To this end, the group called on President Goodluck Jonathan to as a matter of urgency sack the Inspector General of Police, Suleiman Abba.

“We wish to warn those who wittingly and unwittingly discredit and abuse our hard won democracy, to desist forthwith from such ignoble act,” CNPP added.