Germany to drop probe into US spying on Merkel 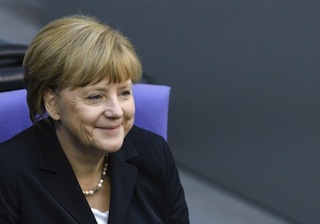 Germany is dropping a probe into the alleged tapping of Chancellor Angela Merkel’s mobile phone by US spies, due to a lack of evidence, magazine Focus said Saturday.

Six months after the investigation began, the experts have failed to find any solid proof to back the case, and have therefore recommended that it be dropped, the magazine reported, quoting sources close to the German justice ministry.

“The result (of the probe) is almost zilch. A lot of hot air, but nothing done,” one source was quoted as saying.

According to sources close to the judiciary, the federal prosecutor will heed the experts’ recommendation to drop the probe.

In June, German justice had announced that a case had been opened into the alleged spying by foreign intelligence services on German soil.

Privacy issues are particularly sensitive in Germany, as bitterness lingers over mass state spying on citizens by the Stasi secret police in former communist East Germany where Merkel grew up.