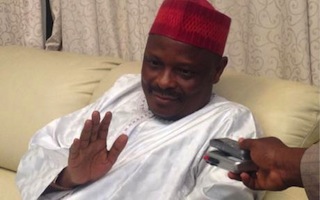 Kano state governor and a presidential aspirants of the All Progressives Congress, APC Engr. Rabiu Kwakwanso has joined other Nigerians in condemning the prevention of the Speaker of the House of Representatives, Aminu Tambuwal and other members of the national assembly from gaining entry into the chamber yesterday to carry out their legitimate duties, describing the act as shameful and embarrassing.

The governor also lambasted the ruling Peoples Democratic Party (PDP) and hinted that the party is running a government of impunity, adding that, it was the act that made him and others leave the party for the APC.

Kwakwanso who was also a former deputy Speaker of the House of Representatives during the 3rd legislative session in 1993 said it was painful that the dignity and honour of the House was subjected to the level of using tear gas on honourable members.

He noted that Nigeria is confronted with leadership failure, blaming the federal government for not supplying the military with necessary tools and equipment to fight insurgency in the northeastern part of the country, noting that, Nigerian soldiers can perform better, if they were properly equipped.

Kwankwaso however expressed worry over the high numbers of the displaced persons in the region, noting that Nigeria has never had it this bad. He urged Nigerians to vote out a government loaded with impunity and corruption.

The Kano state governor stated this Friday during a courtesy visit to Ogun State to meet with the State executive members and other party delegates.

The meeting which was held at the MITROS hall, Ibara Housing estate, Abeokuta had in attendance all the state exco led by its Chairman, Alhaji Roqeeb Adeniji.

According to him, “four million Nigerians are displaced because of insurgency. Thousands are in Niger, thousands are in Chad but PDP and the President are weaving up religious sentiment around the incident so that they can use it to win votes in 2015. I commend the southwest people for not buying such sentiments.

“The insurgency have no place before but now they have carved some places for themselves, they have hoisted flags and they have taken almost equal three states in the country.

“APC has the capacity and political will to provide the leadership to save the country from its present predicament. You all saw what happened at the National Assembly, no right thinking Nigerian will be happy about it. It is the sign of impunity we have been talking about in PDP and that is why we are moving round to tell people that the game is over for PDP and now is the time to send them packing before they do more damage to this great country of ours,” Kwankwaso declared.

In his response to the calling for the state delegates at the National Convention where the Presidential candidate of the party will emerge, the state party chairman hinted that what should be paramount is how the party will flush out the PDP from the centre.

Baba Computer as he is fondly called urged all the aspirants to see themselves as one and be ready to work closely with whoever emerges the party’s flagbearer.

Our correspondent can reliably report that the Kano state governor, who disclosed that Ogun state is like his second home moved straight to the presidential hilltop resident of the former President of Nigeria, Chief Olusegun Obasanjo.

The duo immediately went in for a closed door meeting which lasted for about an hour.

The former President later came out of his inner chamber cladded in blue guinea agbada with blue cap with some aides and drove out in a black jeep with registration number ABJ 01 AL.

Twenty minutes after the Ebora Owu, as Obasanjo is fondly called moved out, the Kano state governor, who our correspondent gathered was eating came out with his entourage and did not attend to the waiting jouirnalists before he drove off.

It was speculated that Kwankwaso had come to seek for the blessings of the former president in his ambition to run as the APC Presidential candidate during the 2015 elections.

It would be recalled that another aspirant and a former Vice President of Nigeria, Alhaji Atiku Abubakar was also in Abeokuta last week friday.