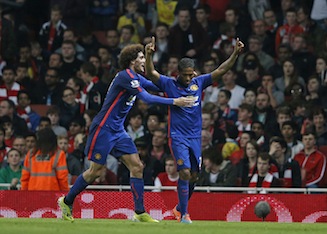 Marouane Fellaini (L) congratulates Antonio Valencia, after his shot is deflected for an own goal

A Kieran Gibbs own goal and a Wayne Rooney strike saw Manchester United return to the Premier League’s top four with a bruising 2-1 victory at Arsenal on Saturday.

Arsenal subjected United’s makeshift back-four to heavy pressure throughout the game at the Emirates Stadium, but Gibbs’s unwitting intervention gave the visitors a 56th-minute lead before Rooney added a late second.

Arsenal substitute Olivier Giroud marked his comeback from a broken leg by slamming home in the 95th minute, but United held on to leave their rivals 15 points adrift of leaders Chelsea in eighth place.

An injury blight obliged United coach Louis van Gaal to deploy a three-man defence of Chris Smalling, Paddy McNair and Tyler Blackett, and the visitors then saw left-back Luke Shaw limp off after turning his ankle.

Arsenal peppered the visitors’ goal with shots, but United goalkeeper David de Gea kept them at bay, notably thwarting Wilshere and Danny Welbeck, who was making his first appearance against the club he left in September.

Wilshere was forced off in the 55th minute after turning his right ankle in a challenge with McNair, and United struck barely a minute later.

Szczesny collided with Gibbs as he came for Ashley Young’s left-wing cross and when Antonio Valencia drilled the ball back into the box, the prone Gibbs instinctively stuck out a leg, only to send the ball into his own net.

Szczesny had to go off, with Emiliano Martinez coming on, and the Argentine was a virtual spectator until Angel di Maria freed Rooney to run through and chip home in the 85th minute.

Giroud fired into the top-left corner from 20 yards mid-way through eight minutes of stoppage time, but United survived to give Van Gaal the first away win of his tenure.