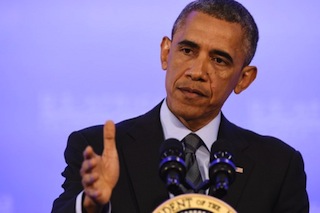 US President Barack Obama urged calm Friday ahead of a grand jury decision expected to trigger protests in the restive town of Ferguson, where the FBI arrested two men on firearms charges.

The black teen’s August 9 death led to weeks of violence, and Missouri’s governor this week declared a state of emergency and activated the state National Guard ahead of the decision.

In a sign of just how heated unrest may be once the grand jury’s decision is made public, the FBI earlier this week arrested two suspected members of the new Black Panthers on outstanding warrants for purchasing two pistols, CBS News reported.

The St Louis residents were arraigned in federal court Friday.

The FBI separately announced it has deployed about 100 agents to St Louis in anticipation of the decision.

“This is a country that allows everybody to express their views, allows them to peacefully assemble to protest actions that they think are unjust, but using any event as an excuse for violence is contrary to rule of law and contrary to who we are.”

“Thank you for lifting your voices to end racial profiling and police intimidation, but hurting others or destroying property is not the answer,” the victim’s father, Michael Brown Sr, said in a somber video plea.

“No matter what the grand jury decides, I don’t want my son’s death to be in vain.”

In the United States, grand juries meet in secret to review some cases before deciding whether criminal charges should be brought.

The jury could indict Wilson, meaning he could face trial, or it could determine there is no case for him to answer.

Authorities have previously said they expect the grand jury decision any time between mid- to late-November.

“We are in the process of setting up the press conference to announce the decision on the Darren Wilson case,” the prosecutor’s office said in a statement.

“The date, time and location hasn’t been decided as of yet. The grand jury is still in session.”

Schools in the area announced they would be closed Monday and Tuesday, “due to the potential Ferguson unrest.”

Holder, America’s top law enforcement official, released a video urging restraint from his subordinates if people take to the streets.

“Over the past few months, we have seen demonstrations and protests that have sought to bring attention to real and significant underlying issues involving police practices, implicit bias and pervasive community distrust,” Holder said.

“This is the hard work that is necessary to preserve the peace and maintain the public trust at all times, particularly in moments of heightened community tension.”

The shooting led to weeks of violence in the St Louis suburb of 21,000, which has an African American majority and an overwhelmingly white police force and town government.

Brown, a high-school graduate planning on attending technical college, was shot at least six times by Wilson. His body was left in the street for hours.

Wilson has reportedly told the grand jury he acted in self-defense after tussling with the youth. Others claim Brown had his hands up in the air when he was shot.

Some demonstrators complained that police used undue force during peaceful protests, and there was widespread criticism of the military-style equipment and uniforms deployed by local officers.

In his video plea, Brown’s father appealed to locals to come together.

“We’re stronger united. Continue to lift your voices with us and let’s work together to heal, to create lasting change for all people regardless of race,” he said.