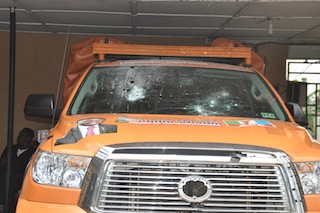 A vehicle destroyed in the raid

A chieftain of the Peoples Democratic Party (PDP) Mr Odion Olaye has been arrainged before an Oredo Magistrate Court over the October 11 attack on the officials residence of Edo state lawmakers.

Olaye who is also the State Chairman of the National Union of Road Transport Employers (NURTW) , was on Friday arraigned before the Magistrate Court.

Olaye was arraigned on a two-count charge of conspiracy, malicious damage of government property and conduct likely to breach public peace.

He however pleaded not guilty when the charge was read to him.