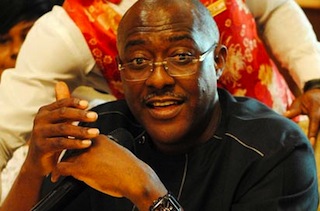 The National Working Committee (NWC), of the PDP has called on the Inspector General of Police to investigate the circumstances that lead to the fracas at the National Assembly on Nov. 20.

The call was contained in a statement issued by Mr Olisa Metuh, the party’s National Publicity Secretary in Abuja on Friday.

The statement said the call had become necessary in the light of accusations and counter accusations over the unfortunate incident that led to the shutdown of the National Assembly.

It charged the Inspector General of Police to unravel the fact of the incident within the next 72 hours.

According to the statement, the sanctity of the National Assembly as an arm of government and citadel of democracy must be upheld at all times.

“The matter should not be shrouded in controversy, sinister plots and mundane accusations”.

It, however, acknowledged that security agencies, within their constitutional powers, could search individuals due to the country`s security challenges.

This, it said, was to ensure that only responsible and duly accredited persons entered the National Assembly complex.

“The PDP is known for its unwavering stand in upholding the tenets of democracy. Our stand for justice, fairness, and equity at all times remains undiluted.

“In the same vein, President Jonathan has been very humble and forthright in upholding these principles and rights of citizens,” it said.

According to it, President Jonathan had instituted free, fair and credible elections and remains unwavering that his ambition is not worth the blood of any Nigerian.

“We therefore believe that there is no need to shroud the development in controversy.

“In this regard, we call for a full investigation to unravel the circumstances surrounding the incident within the next 72 hours.

“Nigerians deserve to know the truth at all times,” the statement stressed.