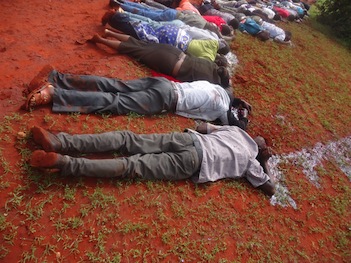 FILE PHOTO: Bodies of the victims killed by Shebab

Somalia’s Shebab Islamists on Saturday seized a bus in Kenya, executing 28 non-Muslim passengers in what they said was revenge for police raids on mosques in the troubled port of Mombasa.

“I can confirm… that 28 innocent travellers were brutally executed by the Shebab,” regional police chief Noah Mwavinda told AFP.

The bus, which was headed for the capital Nairobi, was ambushed shortly after departing from Mandera, a town lying on the border with Somalia in Kenya’s northeasternmost corner.

The around 60 passengers on board were ordered off and the travellers separated by the gunmen into Muslims and non-Muslims.

The militants then had the non-Muslims reboard the bus and tried to drive off with them, but the vehicle got stuck.

“So they executed their prisoners” before escaping back into Somalia, Mwavinda said.

Kenya’s Red Cross confirmed the death toll in a tweet after its team arrived at the scene.

A Shebab spokesman said the deadly attack was in revenge for raids early this week on four Mombasa mosques that added to the simmering tensions in the city.

“The Mujahedeen successfully carried out an operation near Mandera early this morning, which resulted in the perishing of 28 crusaders, as a revenge for the crimes committed by the Kenyan crusaders against our Muslim brethren in Mombasa,” Ali Mohamud Rage said in a statement sent to AFP.

Police this week closed the four mosques in Mombasa, a largely Muslim city unlike much of Kenya where Christians make up 80 percent of the population, on the grounds they had come under the influence of hardliners.

Britain and the United States condemned the attack, pledging to help Kenya combat such actions.

“The United States stands with our Kenyan partners in the effort to counter the threat of terrorism,” US National Security Council spokeswoman Bernadette Meehan said in a statement, deploring the “horrific attack”.

In London, Hugo Swire, minister of state for the Foreign and Commonwealth Office, said “the UK stands by the Kenyan government in its fight against terrorism.”

A 25-year-old passenger on the bus, who asked to be identified only as Ibrahim, told AFP that the vehicle came under fire several times after leaving Mandera, leaving one passenger dead.

The driver tried to escape but was finally forced to stop by the group of around 70 assailants, he said.

The attackers, who identified themselves as members of the Shebab, read verses from the Koran to the Muslims, urging them to combat the Kenyan authorities.

Ibrahim said they were then ordered to walk to a nearby village.

He said he witnessed the execution of two non-Muslim passengers, who were shot in the head.

Ibrahim quoted one of the attackers as saying: “We must fight those persecuting Muslims and closing our places of worship like rats found in a granary”.

– Shebab a threat despite strikes –

Kenya has suffered a series of attacks since invading Somalia in 2011 to attack the Shebab, later joining an African Union force battling the Islamists.

Mandera County Assembly member Abdullahi Abdirahman said local leaders “have pleaded with the government to provide security, but they have turned deaf ears.”

“Today we are experiencing avoidable massacre,” he said.

The Shebab carried out the September 2013 attack on Nairobi’s Westgate shopping mall, killing at least 67 people, as a warning to Kenya to pull its troops out of southern Somalia.

During the Westgate attack, some of the victims were killed after the gunmen weeded out non-Muslims for execution by demanding they recite the Shahada, the Muslim profession of faith.

The Shebab has lost a series of key towns and ports to the AU force and Somalian government army, heralded as advances that would stem the militants’ multi-million dollar business trading charcoal to Gulf countries.

But in a recent report, UN investigators warned that the air and drone strikes on the militia have done little to damage it in the long term and that the insurgents continue to pose a serious regional threat.

Indeed, pressure on the fighters has forced them to “become more operationally audacious by placing greater emphasis on exporting its violence beyond the borders of Somalia” and across the Horn of Africa, said an October report by the UN Monitoring Group on Somalia and Eritrea.