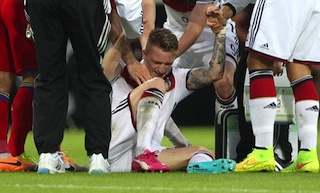 Borussia Dortmund’s Marco Reus will miss the rest of 2014, including Wednesday’s Champions League clash at Arsenal, after suffering his sixth ankle injury in a year, the club confirmed Sunday.

The 25-year-old was stretchered off after tearing the ligaments in his right ankle following a foul by Paderborn’s Marvin Bakalorz, who was later booked, after 66 minutes of Dortmund’s 2-2 away draw on Saturday.

It is Reus’ sixth ankle injury in the last 12 months.

Torn ligaments in his left ankle ruled Reus out of Germany’s victorious World Cup campaign and he missed seven games after injuring the same ankle in the world champions’ 2-1 win over Scotland in a Euro 2016 qualifier in September.

“We wish Marco a speedy recovery, no one can have such bad luck,” Dortmund’s CEO Hans-Joachim Watzke said on Sunday.

Dortmund have already qualified for the Champions League’s knock-out phase with four straight wins before facing the Gunners, but are 15th in the Bundesliga after losing seven of their first 12 league games this season.