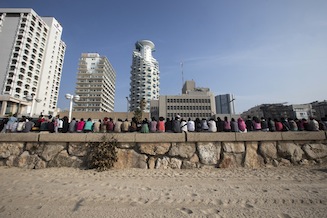 In the backstreets of a run-down Tel Aviv neighbourhood, three Sudanese immigrants blast hip hop from mobile phones and rap about the broken promises of life in the Promised Land.

The youngsters travel regularly from southern Israel to meet in its commercial capital, home to tens of thousands of illegal African migrants, and to pursue their dream of becoming rap superstars.

Habib, 27, lives in the sprawling detention facility of Holot in the Negev desert, alongside some 2,000 other asylum seekers, mostly from Sudan and Eritrea.

Israel is home to some 53,000 illegal immigrants and asylum seekers from Africa.

Habib is allowed to leave Holot just twice each month, and uses that precious time to make the four-hour bus journey to Tel Aviv to meet his “crew” and try to record new music.

Their band called “Innocent Boys” meets near the city’s central bus station in an impoverished area populated by migrants from all over — from Africa, the Philippines and South Asia.

With jeans sagging low and the strut of his American “gangster” hip hop idols, Habib has a wide smile on his face as he listens to his own latest track on his smart phone.

“They put me in prison, but I’m not a criminal, shit!” his disembodied voice exclaims in English through the loudspeaker, turning the heads of several passers-by.

The lyrics are political and address the struggle of illegal immigrants in Israel, where a government crackdown on migration has drawn condemnation from human rights groups.

The other two band members are Mo-Yassin and One-Pac, who has chosen a stage name to emulate his American hero, the late rap star Tupac Shakur (2Pac).

They too dress the part, in baggy jeans, basketball shirts, a cap and a clutch of glitzy neck-chains including an Africa-shaped pendant.

Mo-Yassin and One-Pac’s larger-than-life presence in Tel Aviv is a world away from their everyday reality in the Red Sea resort city of Eilat, where both work as hotel cleaners.

“We go to work, we go to sleep, we go to work… we’re shadows, machines, robots. But we have a dream,” says Mo-Yassin, a former Sudanese army officer who has been waiting for five years for Israel to decide whether or not to grant him political refugee status.

The Innocent Boys do not own recording equipment, so they put the word out to the Sudanese community by text message before arriving in Tel Aviv, asking for use of a laptop, a microphone and a loudspeaker.

Camping out at a friend’s cramped apartment, they wait for the gear to turn up, sipping sweet tea.

Being observant Muslims, none has picked up the drinking or smoking habits of some of their more illustrious American rapper role models.

They use English and Hebrew rather than their native Arabic for both rap and conversation, trying to keep as low a profile as possible in a country where they and their ilk are largely unwanted outcasts.

“Being black is bad enough. If the Israelis hear us speaking Arabic as well, it gets difficult,” jokes Mo-Yassin.

Racism is a dominant theme in their music, and one song called “Promised Land” lists the “broken promises” of life in Israel where they thought they would find “freedom, openness and success”.

Southern Tel Aviv, where the group meets, was the scene of violent race riots in 2012, and anger over the thorny immigration issue hit fever pitch earlier this year as tens of thousands of asylum seekers marched outside embassies and the UN’s refugee agency headquarters.

Israel’s rightwing government passed legislation in December 2013 whereby authorities can detain illegal immigrants for up to a year without trial, and in the same month it opened the Holot detention centre.

It says illegal immigrants from Africa, dubbed “infiltrators”, pose a threat to the state’s Jewish character.

Along with arrests and deportations, Israel has also built a high-tech fence along its border with Egypt’s barren Sinai Peninsula, the main point of clandestine entry.

While some MPs from Prime Minister Benjamin Netanyahu’s ruling rightwing Likud have called Africans a “cancer in our body”, rights groups say most cannot be deported because their lives would be under threat if they were returned to Sudan and Eritrea.

In the end, the promised recording equipment doesn’t show up and the rap trio shuffle outside to a park where many immigrants sleep rough.

Once again it is the music which gives best expression to the duality of their existence.

“We’re trapped here, but we have a dream,” go the lyrics on the latest Innocent Boys track.