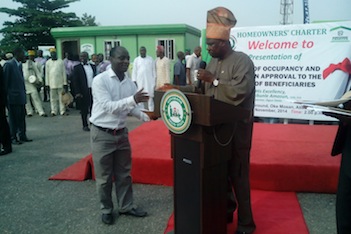 R-L: Governor Ibikunle Amosun of Ogun presents a Certificate of Occupancy to a recipient

The programme which was attended by dignitaries from all sectors including professional bodies, was held at the Arcade ground, Oke Mosan, Abeokuta.

Addressing the mammoth crowd at the event, the state governor disclosed that the programme was designed to enable people acquire genuine titles to their landed properties.

This, according to him, will invariably enhance the development of the state, adding that, it will considerably reduce the amount payable from about N500,000 to N95,000 and as well remove all the restrictive bottlenecks.

“The Homeowners’ Charter Programme was conceived in line with the “Affordable Housing and Urban Renewal Programme” which is part of the “5 Cardinal Programme” of our administration. In the execution of this programme, we embarked on massive infrastructural development across the state.

“This brought to the fore two main issues. We had to demolish property, majority of which had no title deeds. Therefore, we had challenges in evaluating these properties and paying commensurate compensation. Secondly, arising from the fact that these property were non-existent in the face of the law, it became impossible for government to make proper plans for the development of these areas dotted with property with no title deeds.

“On the part of the property owners, they had no document they can tender to financial Institutions to assess loans to boost their business.

“These findings were worrisome and had far reaching consequences for the development of our state. For example, the data revealed that the level of development in certain local government areas was significantly in excess of what is suggested by official records. Indeed, some areas which on official records were villages or even farmland were actually densely populated urban settlements.

“Other areas which were recorded as government owned lands had been extensively encroached by individuals and were fully developed. This resulted in the unplanned and chaotic development in our towns and cities, unrest and un-peaceful co-existence between people living within such environment.

“Also, government could not make adequate plan for development and find it difficult to provide effective and efficient basic amenities such as pipe-borne water, electricity and security. We also discovered that it is not as if our people are lawless, but, they have been hampered by administrative bottlenecks and cost of obtaining these title documents,” Amosun stated.

The governor expressed satisfaction in seeing that the vision is not a misplaced one, commending the good people of the State for their response to the programme.

“Apart from the immediate gains of this programme on the side of both the property owners and the planning authorities, the major one we consider paramount is the lasting legacy of building right and orderly development among our people. I congratulate the lucky beneficiaries who will be collecting their Certificates Of Occupancy and building approvals today.

“You have kept faith with us and this is the outcome of that confidence reposed in us. We have also proved wrong our critics who had earlier said the programme was bound to fail. Through this programme, our administration has been able to show that our word is our bound with the people of Ogun state. In the same vein, it is a confirmation, that our administration gives dividend of democracy to our people without political coloration and ethnic bias,” the governor revealed.

Amosun also disclosed that he has directed the team midwifing the programme, to as from next week,be issuing 500 title documents to beneficiaries on a weekly basis.

He assured other applicants that are yet to be attended to, to remain calm and be patient, promising that their title documents will be ready soon.

Amosun, however commended the team saddled with the Homeowners Charter’s programme, noting that, they have proven to be steadfast and dedicated towards making this dream a reality.

Earlier in his welcome address, Director General, Lands and Survey, Mr Wale Osinowo, thanked the governor for the opportunity given to him and his team to serve, assuring that the sky is the limit.

Osinowo revealed that about twenty people had earlier been given but the government decided to make it open and enable the doubting ‘Thomasses’ to see the reality of the programme.

Many people who spoke at the event commended the state government and the governor for the bold step in alleviating some of the sufferings of the people.

Chief Isaiah Olatokunbo Akinsowon, the State Chairman of the Community Development Council, CDC thanked the governor for keeping to his word, declaring that the governor has shut his critics mouth.

One of the financial partner in the programme, First Bank Plc, called on the people of the state not to relent in making use of the opportunity, urging them to come out for the loan benefits.

Speaking at the event, Business Manager, public sector of the bank in Ogun, Mr Olaniran Oladele congratulated the people and informed that the bank is still available for support and the project will afford them good status as a real owners.