DSS Raid: We Didn’t Know It Was APC’s Office —Ogar 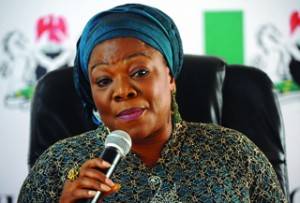 The Deputy Director, Public Relations of the Department of State Security Service, DSS Marilyn Ogar, has explained that the DSS never knew the building raided by its officials on Saturday was All Progressives Congress, APC, Lagos office, adding that the department only swung into action based on a petition it received.

Ogar, while justifying the raid in a statement issued in Abuja, said that the said location had no signpost indicating whether it was a private or government office.

She said the building was subsequently placed under surveillance by the operatives of the DSS, adding that the service only acted when it was convinced that unwholesome activities were going on in the building.

Her words: “A petition was received by this service about some activities at No. 10, Bola Ajibola Street, Ikeja, Lagos. The petition alleged that those behind the activities were cloning INEC permanent voter cards, with the intention of hacking into INEC database, corrupting it and replacing them with their own data.

“Based on this information, the service placed the building under surveillance and having been convinced that some unwholesome activities were going on in the building, it undertook a raid of the premises.

“In the process, some persons were arrested, three hard drives and 31 Ghana-must-go bags of hard copy documents were recovered and taken away for further investigation. It must be noted that the said location had no signpost indicating whether it was a private or government office.”

Meanwhile, the APC has cried out that three out of the 28 workers arrested at the party’s Data Centre by the DSS, Police and the Army on Saturday morning are still in security custody.

The State Publicity Secretary of the party, Joe Igbokwe, stated this in a statement made available to our correspondent, adding that the party was at a loss as to why these three were still being held.

The trio still in DSS custody includes two Data Supervisors Chinedu Atuche and Fayemi Olaposi as well as Chika, an IT Supervisor.

According to the statement, “we want to inform Nigerians that out of 28 workers at APC Data Centre Lagos arrested by DSS, Police and the Army by 5:30 am on Saturday morning of Nov. 22nd 2014 , 25 of them have been released by 9:30 pm yesterday. Three of them are still in the custody. We are at a loss why these three are stillbeing held. They have committed no offence and they are carrying out a legitimate duty. We hope they are not being held and tortured toprovide them with thesecurity password of the Data Centre . We want these workers to be released unconditionally without any further delay.

“We insist that what happened yesterday is bizarre, crude and unacceptable and it remains the worst form of political rascality and irresponsibility ever recorded in Nigeria since 1999. The damage done to the Data Centre and the violation of the fundamental human rights of the workers tells a big story of what to expect in the days ahead. The ruling party (PDP0 is getting desperate and if they are not called to order things can get worse.”

The National Publicity Secretary of APC, Alhaji Lai Mohammed, while speaking during an interview with a national daily, said the party will sue the DSS for the invasion of its Lagos State secretariat.

He dismissed Ogar’s claims, saying that the DSS was acting out a script which was part of a grand plan to intimidate the APC and its supporters to pave the way for the rigging of the 2015 elections.

He challenged the DSS to make public any incriminating document found in the building.

According to him, it is laughable for the service to say the party was cloning PVCs when they could not even get the password into the computers they found in the place.

“What did they get when they got there? They couldn’t invite us. In 2014, just a few months to the 2015 elections, they are telling us they did not know it was our office. They could not even get the password. How can you say we are cloning PVCs? Where is the evidence now?” he queried.

“They even said we had a warehouse where we store weapons, we don’t have any such warehouse and we know nothing about weapons.

“The whole idea is to destablise our party and rig the 2015 elections because what they have done now is to take our database and from there make sure that we don’t get PVCs, that’s what they are doing and this is not going to be allowed to go like that.

“What this administration is doing is an invitation to anarchy, we will not allow the excesses of a few individuals trying to use institutions sustained by tax payers’ money to truncate this democracy that we all laboured and fought hard to give life to,” he said.