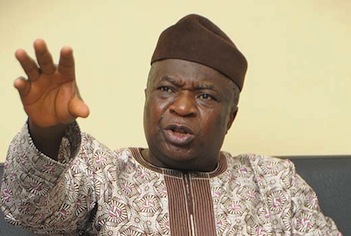 He said, instead, Fayose had experience in hooliganism and that this was what he exhibited when he sponsored seven members of the House to impeach him, the Deputy Speaker, and other principal officers of the House recently.

Omirin, who was given a privilege at a special parliamentary session held by the Lagos Assembly to raise alarm over the tension-filled political atmosphere in Ekiti and the National Assembly, as well as the involvement of the police in partisan politics, said Fayose had thrived on illegalities since he was elected a second time as governor of the state.

“The seven members of the Ekiti State Assembly are committing attrocities and are backed by the state governor. The governor has experience in hooliganism. That’s where he has his experience,” Omirin, who was at the Assembly with 18, out of the 26 lawmakers, said.

Giving details of the crisis at the Ekiti Assembly, Churchill Adedipe, the Majority Leader of the Ekiti State House of Assembly, said it started with Fayose’s second coming.

“And logically, the question to be asked is: what has been the offence of somebody that was just being inaugurated?

“Before the world, I would want to say today that at the first meeting we had with him to actually resolve that, he told us to our face that he would continue to move from one market to the other to blackmail us and to lie against us.

“To people among us who have not been opportuned to sit with him one-on-one, they had the opportunity of knowing who he is.”

He said shortly after the meeting, he wrote to the House about his nominees for political appointment and expected the House to confirm them without screening or even taking a look at their credentials and other documents as against the Standing Rule of the House.

“As the Majority Leader, I stood up to say: ‘well, that particular issue would be stepped down to be discussed in our next opportuned date as provided again by the Standing Order of the House.’

“On the issue of the Local Council Development Areas (LCDAs), the issue again was brought up and it is again guided by the Standing Order of the House that any issue before the court, especially ones that would have court summons to that effect, that the House has no right to actually have any discussion on it. As such, it was stepped down.

“Shortly after the sitting of that day, they started their serial blackmail again on ESBS (Ekiti State Broadcasting Service) to the extent that people started calling and questions were being asked. We adjourned that day till the next day,” adding that the House even passed a N200 billion loan request by Fayose.

He also said the House could not, at the sitting, discuss the Local Council Development Areas, LCDA, since it was a court case.

Adedipe said suddenly, officers of the Nigeria Police were mobilised to the Assembly where it culminated in seven members impeaching the principal officers.

“As a matter of fact, we want to equally use this opportunity to tell the governor of Ekiti State, Mr. Ayo Fayose, that it is not the business of Mr. Governor to regulate the activities of the House. We are being guided by the constitution and the Standing Order of the House.

“He may have the responsibility to regulate the activities of the executive arm, but not the State House of Assembly. And if he had been talking about some people negotiating the N2 billion SME loan that we passed for him on that same day, that there was a committee set up to discuss how the members would get 10 percent, I want to say it here that it is only the devil that would dine and wine with Mr. Ayodele Fayose knowing full well that we know the background of these persons in office.

“Democracy sometimes can allow some things to fly because in a comity of serious-minded men, you don’t need to have such a person presiding over the affairs of men.

“And we want to state it clearly that if there are some people who have been negotiating with him, he should look inward into the camp of those who are presently committing criminality in  the State House of Assembly because everybody knows their antecedents,” he said while urging the members of Lagos House of Assembly to come to their aid.

Fayose, has in the aftermath of the crisis, absolved himself of the impeachment, arguing that he understood the principle of separation of powers.