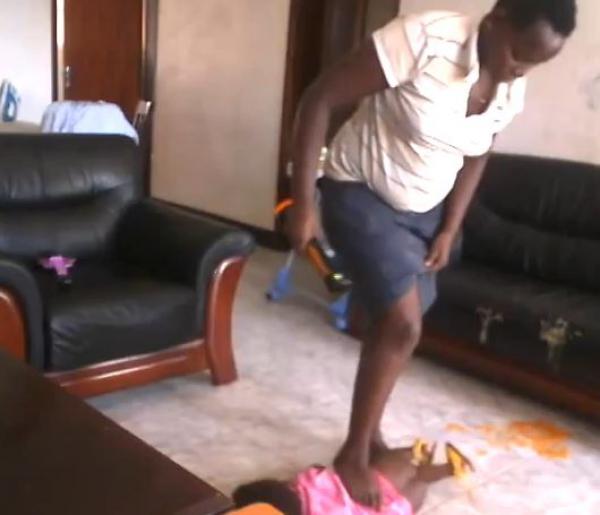 Ugandan police have arrested a maid for attempted murder after she was seen on a film abusing a baby, reports said Monday, in a case that has shocked the country.

Worried parents, who installed a CCTV camera when they were at work, were shocked to see they had filmed the maid pushing the 18-month-old baby girl to the floor.

She then kicked the child’s face and stomach before putting her entire weight on the girl’s back before dragging her out the room apparently unconscious, newspaper reports said.

The obviously mad maid slapped the baby when she rejected the food being offered her. Then the mad is seen forcing the baby to swallow several spoon-feeds at a go. Moments after, the baby vomited the food. That provoked the maid’s insanely brutal reaction, according to the video in circulation.

The disturbing video has been seen or shared tens of thousands of times on social media.

Police spokesman Fred Enanga said the maid, named as 22-year-old Jolly Tumuhiirwe, had been charged with attempted murder. She is due in court on December 8.

The parents told Uganda’s New Vision newspaper the baby was traumatised and bruised.

“The video of this baby being beaten is shocking,” UN children’s agency chief in Uganda Aida Girma said.

“Any such act of abuse and violence against children is completely unacceptable.”

The baby’s father is Erick Kamanzi, a staff at a reputable NGO in Kampala.