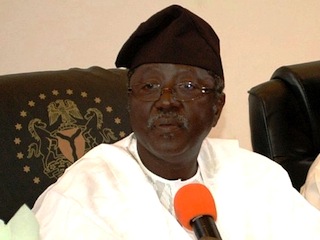 NAN reports that the returnees, who were received in style by Governor Jonah Jang, spoke through Mr Pam Gyang, Tallen’s running mate in 2011 governorship election, while in Labour Party.

Although Dariye and Tallen were not mentioned in the list of the defectors called out, they were seated at the Nenfor Arena, Pankshin, in Plateau, where they were formally received by Jang and other party leaders.

“Most of us, the returnees, are founding members of PDP but defected due to one reason or the other but today, we are back home; there is no place like home,” Gyang said.

The spokesman pledged the returnees allegiance to PDP, adding that they would work for the party’s interest.

According to him, “we will cooperate with other members of the party and do our best toward the success and progress of the PDP”.

Jang, who was represented by Dr Paul Wai, the Commissioner for Education, welcomed the returnees in to the PDP, which he described as “so large to accommodate everybody”.

“We expect all of you who returned to bring all your experiences to bear so as to add value to our democratic experiment,” the governor said.

He called on members and supporters of PDP, especially aspirants, to eschew politics of bitterness and embrace acts of sportsmanship.

The governor said with the 2015 elections around the corner, “let us work as a team to move the party to greater heights”.

Earlier, the acting chairman of PDP in Plateau, Mr Raymond Dabo, said that the returnees went through the proper channel, beginning from their ward levels.

He expressed joy that those who left the party for whatever reasons had deemed it fit to return and work for the good of the party.