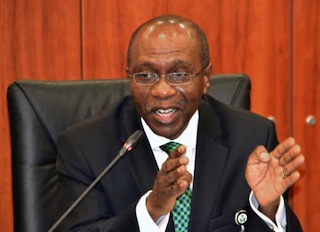 Nigeria devalued its currency on Tuesday, seeking to stabilise the naira after it hit historic lows against the US dollar, as falling world oil prices hurt the country’s foreign reserves.

It had been trading at nearly 180 naira to the dollar, despite the official band of 150-160 naira, and the Central Bank had vowed to continue defending the currency against market pressures.

But Nigeria, which derives roughly 70 per cent of government revenue from oil sales, has had to cope with dwindling foreign reserves amid the oil price slide, making it increasingly tough for the central bank to defend the naira.

“The committee was of the opinion that the economy stood to gain by… allowing some flexibility in the exchange rate,” Emefiele said after a Monetary Policy Committee (MPC) meeting.

The central bank has set the new target rate at 168 naira to the dollar, he said.

Economic analyst Bismark Rewane told AFP that the move showed “the independence of the central bank”.

“It also shows that oil price movement can drive people to do things which may not be politically popular,” he said.

He added that a failure to accept the current real market value of the naira would likely have backfired.

“If they did something that the market didn’t like then the naira could have just collapsed,” he said.

Devaluing the currency, especially three months before a general election, may not be a popular move in President Goodluck Jonathan’s inner circle, especially as the Nigerian leader tries to trumpet economic gains as he campaigns for re-election.

But Rewane and other analysts said the CBN had no choice after Nigeria’s main crude product slipped to $78 per barrel, after selling at more than $100 just two months ago.

“It was a difficult decision, but one which everyone believes had to be made,” said Jide Akintunde, editor of the Financial Nigeria magazine.

The CBN on Tuesday also raised the rate at which private banks can borrow from the central bank by 100 points, from 12 per cent to 13 per cent.