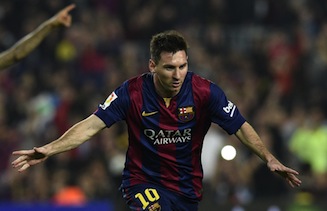 Lionel Messi became the all time leading goalscorer in the Champions League just four days after achieving the same feat in La Liga with his 72nd goal in the competition against APOEL Nicosia on Tuesday.

Messi was captaining Barca on the night and stabbed home his side’s second goal of the evening from close range after Luis Suarez had opened his account for the club with the opener.

The Argentine moves ahead of Raul, who scored 71 goals in 142 appearances for Real Madrid and Schalke, with Cristiano Ronaldo just one goal further back on 70.

Messi now hold both records at just 27 years of age and reached the new record mark in 51 fewer games than Raul with both men having won the tournament three times.