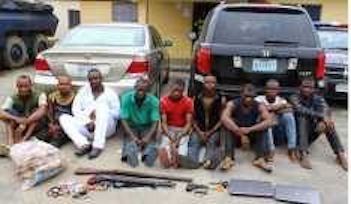 Rivers State Police Command has nabbed nine suspected cultists and has paraded them at the headquarters along Moscow Road, Port Harcourt.

In a statement by command endorsed by Ahmad Muhammad, the Police Public Relations Officer, PPRO, said the hoodlums were arrested November 24, 2014 at about 02:00 a.m., based on a distress call that indicated planned battle of supremacy between De-Well and Degbam cults groups at Okwuzi Community in Ogba/Egbema/Ndoni local government area of the state.

The clash was averted by the swift action of the police who arrested seven suspected cultists. They are: Chinazo Amaechi, Nna Chisom, Solomon Ossai, Regimus Igwelatu, Monday Jackson, Chinonso Fordima and Tony Amanya, others fled the scene.

The suspects on interrogation confessed to belonging to either of the groups. In a response to similar distress call same day at about 1:30 p.m. information received had it that some suspected cultist were sighted with arms around the back gate of Rivers State University of Science and Technology, Port Harcourt (RSUST) initiating new members.

A Team of policemen stormed the area arrested and Joel Ozekume, a final year student of RSUST and Princewill Brown, a graduate of Cross River State University while others escaped.

One Beretta pistol and 3 rounds of .9mm ammunition were recovered from them.

The Command warned criminals and their cohorts to denounce or be ready to face tough time as the Command is fully ready to take the aggressive onslaught to their enclaves.

The Command equally assured the people of the state of its readiness to sustain instant response to distress calls within the shortest possible time while members of the public are urged to be security conscious and report any character or movements capable of undermining the existing public peace and security.