Senate yet to decide on extension of state of emergency 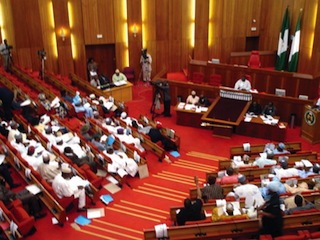 He directed the Senate spokesperson, Sen. Enyinaya Abaribe, to brief newsmen on the lawmakers’ interaction with the service chiefs.

Meanwhile, Mark said that the pandemonium in the National Assembly on Nov. 20 would be discussed in plenary on Wednesday.

Addressing newsmen after the senate adjourned, Sen. Abaribe said the issue of state of emergency was not discussed in the meeting.

He said the meeting was basically to discuss the challenges faced by the military in combating the “asymmetrical war”.

“The question of the state of emergency was not what was on the table today. We are going to wait until it is brought on the floor of the senate and we will discuss it.

He said the senate confirmed from the briefing from service chiefs that the military “have some problems which have to do with the troop levels, the level of equipment and of course all the other problems.

“We are very glad that the military is at this moment gearing up itself to be able to deal with this asymmetrical conflict in the North East of Nigeria.

“We can assure Nigerians that the military is up to the task of dealing with this matter.”

However, the Chief of Defence Staff, Air Marshal Alex Badeh, and the Inspector-General of Police, Suleiman Abba, were absent.

NAN recalled that the third attempt by the Senate to arrive at a consensus on the extension of the state of emergency on Nov. 20 after two stalled attempts still failed.

The senate president had shut the National Assembly over the commotion that broke out at the assembly.

The Nigeria Police had fired teargas inside the parliament premises, in an attempt to stop opposition lawmakers, including the Speaker of the House of Representatives, Alhaji Aminu Tambuwal, from entering the building.

Members of the house were also expected to vote on Federal Government’s request to extend emergency rule in the northeast region but could not do so due to the mayhem.