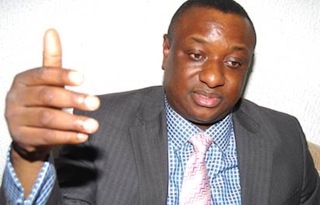 Nigerian Human rights lawyer, Festus Keyamo, on Monday said the Nigeria Police Force committed illegality for shutting the entrance to the House of Representatives last Thursday and preventing Speaker Aminu Tambuwal and other legislators from gaining entrance to do their legitimate job.

Keyamo also commended the lawmakers who scaled the gate to access the chamber of the House arguing that they had to do all within their power, legally, to gain entrance.

“The police in this case, engaged in pure illegality by barricading the gates of the National Assembly, even if they did so on the orders of the Inspector-General of Police.

“The orders of the IGP do not amount to law and he is not a demigod to decide who enters any premises or not,” Keyamo said in a statement he issued late Monday.

“I am sorry to say that many of these opinions condemning the action of the lawmakers are actuated by misinformation, partisan politics, and lack of knowledge of the law or plain bias. I completely disagree with those condemnations.

“Let us not forget that the lawmakers have a legal, legitimate and constitutional right to enter into the Chambers of the National Assembly having been elected to so do by Nigerians.

“To prevent them from gaining entrance, therefore, without a court order, or any legislative order suspending any member or members from the precincts of the National Assembly (whoever the person or authority is) amounts to illegality,” he added.

Keyamo said that in the ensuing condition, the lawmakers had the right to do whatever was legal to protect their mandates and discharge their constitutional duties to Nigerians.

“Scaling of a fence into a premises where you have a right to enter is not an offence anywhere in Nigeria, either under the Penal Code or under the Criminal Code.

“If I arrive my house and see a madman by my gate who may attack me, I may decide to call the Police or simply scale my fence into my house to rest and have my peace. However, it was the very Police which one should run to for help that were the ‘madmen’ on this occasion. There was no one else to run to. They had to scale that gate.

“Let us not forget too that there was a real plot (not unusual in our kind of democratic environment) to allow only a handful of PDP legislators into the chambers to ‘impeach’ the Speaker and install the Deputy Speaker as ‘Speaker’.

“The other lawmakers had no option but to do all that was legal and necessary to stop that illegality which included scaling that fence. I have said before that scaling a fence into your own premises is not an offence anywhere in our laws, more so it would have been total cowardice on the part of the affected lawmakers for them to fold their arms and do nothing about the situation. They have the utmost duty to protect the Will of the people.

“I am very proud of those lawmakers who scaled that gate. They are the bold, courageous and uncompromising lawmakers we so dearly need in this country to stand up against tyranny and to protect our democracy.

“They have shown guts, grits and nerves to confront bullets, teargas and brute force to protect the democratic institution of the Legislature from Executive interferences. They deserve commendation and not condemnation.