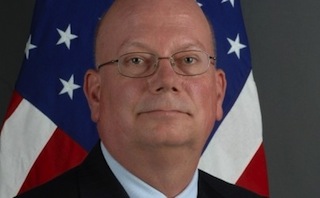 James Entwistle, US Ambassador to Nigeria

For Nigerians planning to travel to the United States, the visa application process has changed, an official said on Tuesday.

Stacie R. Hankins, the Consular Chief at the American Embassy in Nigeria who addressed journalists simultaneously at a briefing in Abuja and Lagos said a new passport collection centre has opened in Port Harcourt.

“The US Mission is pleased to announce that as of 8 November, our document collection and distribution partners with DHL expanded to include a new location in Port Harcourt,” Hankins said.

As it is the case with DHL locations in Lagos and Abuja, visa applicants with approved applications can now collect their passports with their visas from the DHL collection centre in Port Harcourt.

“Applicants will have the option of selecting any one of the three sites as their pickup location when they complete their online application,” Hankins said.

Similarly, she said, applicants who qualify for the drop box renewal programme can submit their passports and applications to the Port Harcourt DHL collection centre.

However, processing time for the collection centre in Port Harcourt will take an additional day.

Passports are generally available for pick up from the Abuja ‎collection centre in two days. In Port Harcourt, it will take three days, she said.

Non-immigrant visa applicants were also reminded that ‎when making an interview appointment, they must include the correct confirmation number from their DS-160 online application form as part of the required information.

“Beginning‎ December 1, those applicants who fail to comply with these instructions will not be allowed to interviews. We believe this change will make application processing faster and more efficient,” said Hankins who has been serving as the Consular Chief in Abuja since August this year.

She said the embassy approved majority of visa applications made by Nigerians in the last two years.

An official at the US Consulate in Lagos disclosed at the briefing that last year 15500 immigrant applications were received and 14900 were approved.

Hankins dismissed long held insinuations that the American Government uses a quota system to grant or deny visas to Nigerians, saying simply that there is nothing like quota.

She said visas are granted or denied based on Section 214B Immigration and Nationality Act.

For non-immigrant visas, she said, applicants must prove that they have enough funding to support themselves in the United States and would voluntarily return at the end of their stay.

In the event of a visa refusal, it is advised an applicant re-applies 90 days after except there have been substantial changes in their circumstances, she said.

“We hope that Nigerians’desire to visit our beautiful country will continue to grow, and we look forward to working its our partners to allow qualified tourists and business travellers to do so,” Hankins said.