Campaign To End Violence Against Women Begins‎ In Lagos 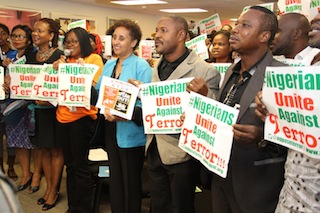 Activists met on Tuesday in Lagos ‎to say no to all forms of violence against women as they began sixteen days of activism against gender-based violence.

Gender-based violence is a form of violence that results in physical, sexual and psychological harm to either women or men.

From November 25 (International Day for the Elimination of Violence Against Women) through December 10 (International Human Rights Day), Nigerian activists will join the international community to increase awareness of the devastating impact of gender violence.

The 16-Day ‎campaign is themed: “From Peace in the Home to Peace in the World : Let’s Challenge Militarism And End Violence Against Women”. The same theme was used in 2012 and 2013. 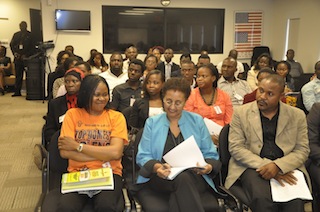 Nigerian civil society organisations such as the Centre for the 21st Century Issues, Women Arise, Acts Generation and Women Advocates Research and Documentation Centre were present.

Dr. ‎Joe Okei-Odumakin of Women Arise who delivered an emotional graphic presentation titled “The Bitter Truth Against Gender-Based Violence” called on Nigerians to stop violence against women and encouraged victims to speak up and seek help.

To Titilope Akosa of the Centre for the 21st Century Issues there is need for more funding to help victims of such violence and seek justice for them.

According to Grace Kelefe of Women Advocates Research and Documentation Centre, violence against women is on the increase and legal bottlenecks still persists.