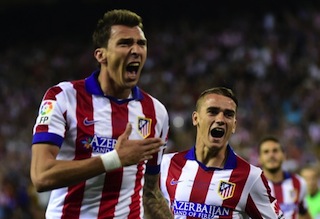 Croatia striker Mario Mandzukic blasted a hat-trick as last year’s beaten finalists Atletico Madrid booked their place in the knock-out rounds of the Champions League with a 4-0 win over Olympiakos on Wednesday.

Juventus are in pole position to join the Spanish champions in qualifying from Group A after goals from Spaniard Fernando Llorente and Argentina’s Carlos Tevez gave the Old Lady of Turin a 2-0 win at Malmo, who are eliminated.

Olympiakos can still qualify in second place but must beat Malmo at home in two weeks time and hope Juve lose to Atletico in Italy.

Raul Garcia opened the scoring for Atletico before Mandzukic took over but the Spaniards still need a draw against Juve in Turin in two weeks — or a defeat by no more than one goal — to finish top of Group A.

Arsenal were another side to secure a last 16 berth as Yaya Sanogo scored his first goal for the club.

His strike, just two minutes in, followed by a second-half goal from Alexis Sanchez, helped the north Londoners to a 2-0 win over Borussia Dortmund at the Emirates, although the Germans still lead Group D by two points.

Two goals from Chancel Mbemba gave Anderlecht their first win of the group stage with a 2-0 success against Galatasaray that secured them the consolation place in the Europa League.

Title-holders Real Madrid continued their perfect record in this season’s competition as Cristiano Ronaldo netted in a 1-0 Group B win at Basel.

That goal, set up by Karim Benzema, took Ronaldo level with Spaniard and former Real star Raul on 71 Champions League goals, second only to Lionel Messi, whose hat-trick on Tuesday took him up to 74 goals.

The result gave a boost to Liverpool’s chances of qualifying for the last 16 despite the English side being pegged back by a late Georgi Terziev leveller in a 2-2 draw at Bulgarians Ludogorets.

Liverpool and Ludogorets trail Basel by two points in the race for second place but the English side know they must win at Anfield in two weeks time to ensure they progress, or else Basel’s name will go into the draw for the last 16.

Ludogorets are out as they cannot finish above both Liverpool and Basel, even in the unlikely event they were to win at the Bernabeu in their last match.

Rickie Lambert’s first Champions League goal followed by a strike from Jordan Henderson, teed up by Raheem Sterling, put the visitors in the driving seat by half-time, but they couldn’t hold out.

Bayer Leverkusen added their name to the last 16 qualifiers despite being beaten 1-0 at home to Monaco in Group C.

Lucas Ocampos scored the only goal of the game in Germany 18 minutes from time from close range after being teed up by Nabil Dirar.

It means the French side need only avoid defeat at home to Zenit St Petersburg in two weeks to join Leverkusen in the knock-out stages.

Zenit beat Benfica 1-0 in Russia — the result that secured Leverkusen’s qualification — thanks to a goal from Portuguese winger Danny.

Leverkusen can ensure top spot in Group C by winning away to Benfica, who are already out, in two weeks while Zenit must beat Monaco to progress.