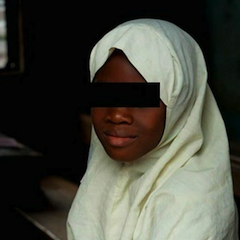 Nigerian prosecutors opened their case on Wednesday against a 14-year-old girl accused of murdering her 35-year-old husband, with testimony from a child allegedly sent to buy the murder weapon: rat poison.

Wasila Tasi’u, from a poor, rural family in the mainly Muslim north, could face the death penalty if convicted in a case that has outraged rights activists who say a girl who married a man more than twice her age should be treated as a victim, not a criminal.

Prosecutor Lamido Abba Soron-Dinki’s first witness was a seven-year-old girl identified as Hamziyya, who was living in the same house as Tasi’u and her husband Umar Sani, when the child-bride allegedly laced his food with rat poison.

Hamziyya was identified as the sister of Sani’s “co-wife”, referring to a woman the deceased farmer had married previously in a region where polygamy is widespread.

“She said rats were disturbing her in her room,” Hamziyya told the court.

The prosecution alleges that Tasi’u instead put the poison in the food she had prepared for a post-marriage celebration, perhaps because she regretted her decision to marry Sani.

Judge Mohammed Yahaya, sitting at the Gezawa High Court, has entered a plea of not guilty for Tasi’u, who refused to respond at a previous hearing on October 30 when the charges were put to her.

Yahaya has rejected defence applications for the case to be transferred to a juvenile court.

Hamziyya’s testimony was supported by Abuwa Yusuf, a shopkeeper in the town of Unguwar Yansoro, who confirmed selling the poison to the child.

“When he brought the food (I) noticed some sandy-like particles, black in colour,” he told the court.

He ate four of the small balls made of bean paste but “was not comfortable with the taste”, he said, adding: “It was only Umar (Sani) who continued eating.”

He said he later saw Sani in the garden visibly ill and took him home.

While trying to care for Sani, he learnt that three others who ate the food had died suddenly.

Prosecutors allege that Tasiu’s poison food killed four people and have joined all the reported deaths into one murder charge.

Nigeria is not known to have executed a juvenile offender since 1997, when the country was ruled by military dictator Sani Abacha, according to Human Rights Watch