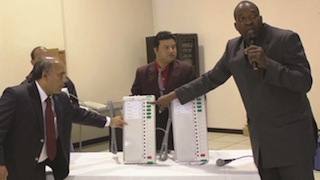 Namibia election commissioner demonstrates how to use e-voting

Namibia will vote in Africa’s first electronic ballot Friday, a general election that will usher in a new president and quotas to put more women in government.

But opposition parties have launched an 11th-hour challenge to the use of the Indian-made e-voting machines, claiming the lack of a paper trail could open the door to vote rigging.

They are calling for the elections to be delayed until February. A court is expected to rule on the issue Wednesday, but commentators say the vote is almost certain to go ahead.

If and when it does, Namibians will chose 72 members of the national assembly and one of nine presidential candidates, ranging from the left-wing Economic Freedom Fighters to the white minority Republican Party.

Around 1.2 million Namibians are eligible to cast their ballots at nearly 4,000 electronic voting stations across this vast desert nation.

But there is only one likely winner.SWAPO candidate and current prime minister, 73-year-old Hage Geingob, has run on a platform of “peace, stability and prosperity” and is sure to become the new president.

SWAPO was forged from the embers of the anti-colonial and anti-apartheid struggle and has won every election since Namibia’s independence from South Africa in 1990.

“I was born SWAPO,” said Hosea, a Windhoek student who vowed to vote for the party of liberation this Friday.

According to pollsters, the party remains hugely popular.

The question will be whether discontent over social and economic issues will eat into SWAPO’s support, eroding its 75 percent haul garnered in 2009.

Single mother of four Gredula Nashima, 39, said she will vote for SWAPO again this time, but wants to see change.

Sat in the dirt outside her zinc panel shack by a pile of bones, she talks about unemployment, poor housing and a lack of electricity as she artfully, but violently butchers cow’s heads with an axe.

Hacking and smashing at the skulls, she renders the meat to small strips that are hung on a clothesline to be dried and sold, or made into “Kapana” — slices of grilled meat. The leftover bones are sold to a fertiliser company.

“We want to see our leader, whoever will be in the seat, to look at our living conditions, our roads are not tarred, but we also want help for those who have their own businesses,” she said.

Like many Namibians she remains sceptical about opposition parties and their motives.

“I don’t know their intentions and their objectives. If I did know I would be with them,” she said.

Like many of Africa’s liberation movements, SWAPO has become a big-tent party that spans the political spectrum and often seems more involved with intra-party politics than voters.

Supporters say that allows for continuity, but critics say it brings stasis.

Economic growth is forecast at around four percent for this year, yet one in four people is out of work according to the government’s narrow definition.

The economy remains dependent on diamond and uranium mining.

“It’s crazy, if dealers say it is not busy then they are just being lazy.”

Van Tonder said that she sells small cars to people working in mining and other industries, but top dollars come from “people from the ministries” — the government elite who buy the sleekest German sedans.

In a bid to be more in touch with voters SWAPO has vowed to put half of party and parliamentary posts in the hands of women.

The party has launched a “zebra” parliamentary list — one man, one woman — to make sure half of parliamentarians are women.

But facing a backlash from sitting male MPs, the party has also proposed expanding the number of parliamentarians.