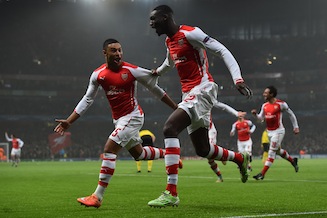 Arsenal qualified for the last 16 of the Champions League for the 15th successive season as Yaya Sanogo’s first goal for the club and a gem from Alexis Sanchez clinched a 2-0 win over Borussia Dortmund on Wednesday.

Arsene Wenger’s side were desperately in need of a morale-boosting European victory after back-to-back defeats against Swansea and Manchester United left them well adrift in the Premier League title race.

Those dispiriting losses prompted a section of Arsenal’s support to call for Wenger’s sacking, while stinging criticism of the Gunners boss from the club’s second-largest shareholder Alisher Usmanov added to the impression of a season spiralling out of control.

But Sanogo took less than two minutes to notch his first goal for Arsenal, in his 18th appearances since his free transfer from Auxerre in 2013, and a majestic second-half strike from Sanchez ensured the north Londoners, who had needed a point to go through from Group D, once again advanced to the knock-out stages of Europe’s elite club competition.

Their spirits lifted by a dominant display at the Emirates Stadium, Arsenal could still snatch top spot from Dortmund with a victory in their final group fixture at Galatasaray on December 9, providing the out-of-form Germans lose against Anderlecht.

“We are a team that likes to go forward but sometimes we dominate the game and we maybe forget to take precautions to defend. We did that better tonight,” Wenger said.

Dortmund coach Jurgen Klopp added: “We can play much better than tonight. We weren’t courageous enough.

“It could have been much more difficult for Arsenal but we didn’t close them down enough.”

With Danny Welbeck ruled out with a knee injury and Olivier Giroud ineligible, Wenger gambled on the inexperienced Sanogo as his lone striker instead of Germany international Lukas Podolski.

A poor performance would have given the critics more ammunition to attack Wenger, but it proved an inspired move as Sanogo put Arsenal ahead after just 73 seconds.

Sanogo then turned and ran on to Cazorla’s return pass before guiding a cool finish under Dortmund goalkeeper Roman Weidenfeller.

Dortmund held a training session on pitches normally used by part-time players in London’s Regent’s Park earlier in the day and Klopp’s team were guilty of some fairly amateurish defending as they allowed Sanogo another sight of goal which the youngster squandered with a hesitant touch.

Henrikh Mkhitaryan should have done better than poke tamely over from a good position and Wenger’s team survived a penalty appeal when Kieran Gibbs caught Lukasz Piszczek.

Emiliano Martinez, making only his fourth start in goal for Arsenal, had to preserve his side’s lead with a good save to keep out Mkhitaryan’s drive at the near post after Piszczek got behind Gibbs to nod down a lofted pass.

Although Dortmund had already qualified for the last 16 after winning their first four group fixtures, they are in the midst of a terrible run in the Bundesliga and looked bereft of confidence and creativity once those chances were squandered.

Sanchez nearly took advantage of their angst when the Arsenal winger was allowed to advance unchecked for a low shot that forced a good stop from Weidenfeller early in the second half.

Alex Oxlade-Chamberlain went even closer when he hit a dipping half-volley against the crossbar.

Yet there was no need for Arsenal to rue those near-misses as Sanchez produced a moment of magic to double the lead and kill off the Germans in the 57th minute.

Cazorla started the move with a crisp pass out to Sanchez on the left flank and, with Dortmund backing off, the Chilean was able to cushion the ball with his first touch, shift it inside with his second, before curling a sublime 20-yard effort beyond Weidenfeller for his 13th goal in just 20 appearances for the Gunners.