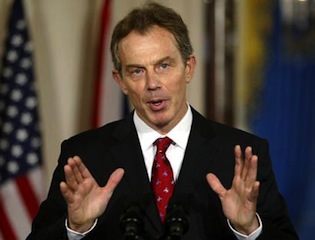 Almost 200 staff at the global charity Save the Children have signed a letter condemning its decision to give former British prime minister Tony Blair an award for his work on debt relief.

The signatures were collected after the US branch of the charity handed Blair its “Global Legacy Award” in New York last week, The Guardian newspaper said Wednesday.

The internal letter, seen by AFP, said his history as the prime minister who took Britain into the Iraq war risks damaging Save the Children’s credibility.

“The decision to award an extremely divisive figure accused of war crimes is not only morally reprehensible, but also endangers our credibility globally and could put our programmes and staff on the field at risk,” it said.

An online petition calling for the award to be withdrawn has also attracted almost 100,000 signatures, reflecting the passions Blair continues to stir even seven years after leaving office.

The Labour leader was prime minister between 1997 and 2007, during which he led Britain into the wars in Iraq and Afghanistan and worked with the United States in the “war on terror”.

“His ‘legacy’ in Iraq overshadows his achievements in Africa,” said the petition on 38degrees.org.uk.

Save the Children granted the award for Blair’s role in leading G8 leaders to agree a huge package of debt relief at the 2005 Gleneagles summit and his continued work in Africa through his Africa Governance Initiative.

A spokeswoman said: “In a global organisation like ours of thousands of people our staff have strong views on a whole range of issues and people and we respect that diversity of views.”

However, Blair’s office condemned The Guardian’s report of the backlash as “neither balanced nor fair”.

It “conveniently disregards the facts that support the award as well as quotes from African presidents, the head of USAID and indeed anything which would give a more balanced view than the one presented”, it said in a statement.