They’re Fighting Me Because I Stopped ‘Stomach Infrastructure’ —LASU VC 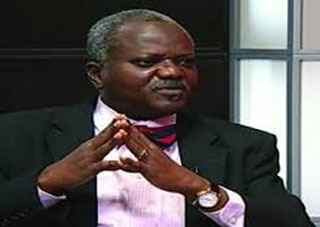 The Vice Chancellor, Lagos State University, LASU, Prof. John Obafunwa says some people are contending with him because he stopped what he called ‘stomach infrstruture’ in the ailing institution.

Obafunwa, in an interview with newsmen recently said because of his crusade against corruption in the institution, those who had profiteered from the system still wanted the rot to continue so that they could continue to live and feed on the system unjustly.

“For the things we hear outside, they might not necessary be true. Most of the things that happen have to do with the fact that many people are no longer benefitting from the leakages, but I really thank those who have continued to stay by the administration,” he stated.

Obafunwa said it was only natural that when one wanted to bring about a change, some people would want to resist it, particular when it appeared “you are blocking certain avenues. When I came in, about N13 million was being expended every month on imprest and I know some people who don’t have to wait for their salaries, they just have to depend on the imprest.

“I know fuel allowance was being collected for a vehicle that was actually off the road, I know a particular unit at that time where a particular director was collecting N610,000 monthly and we were able to run the same unit with N90,000,” he disclosed.

According to Obafunwa, in the process of getting certain things done, one was likely to step on toes, “but you have to make up your mind, do you want to be a friend to everybody or you have to do what you wanted to do? While it is true that it has not been amazing, there is a difference between ASUU-LASU and ASUU-Executives, otherwise, how come we were able to resume lecture despite the impetuous period, but there is no need of these, in an atmosphere of peace, we will achieve success.”

He said the decision of the senate to withdraw Ph.D certificates of 19 lecturers was based on the fact that there were errors in issuing the certificates, adding that there might be compromise somewhere during the issuance of such certificates.

According to him, the whole issue came to the fore because a woman lecturer came directly to the senate and complained that she was given a Ph.D in a programme she did not enrol in, specifically saying that what she enrolled for was in M Phil Ph.D in International Business and was given a certificate of Ph.D in Business Administration (Marketing) and that person had refused to collect the certificate.

“I did not even know anything about it. When it came to the fore, we now asked a question, what happened? She came to Senate and not to me and Senate directed the Dean of Postgraduate School and Dean, Faculty of Management Sciences to go and bring all the materials of the Ph.D that were awarded in the last three to four years to be looked at. Then they came with 19 and not actually 14.

“Senate spent about three hours debating this particular issue and senators were able to categorise everything into about three groups. Group one were about eight lecturers who had no problem, although senate decided that they will like to see their certificates of conversions and what they were admitted for in the first instance.

“These people were straightforward, they were given Ph.Ds in the areas they enrolled for, they just wanted the documentation. You have two other groups; one group the university senate considered to have some mild problems and another one, a very serious problem. Senate now decided to look at the documents presented and discovered that it gave approval in 2004 for the postgraduate programme-M Phil Ph.D Business Administration; M Phil Ph.D Management and M Phil Ph.D in International Business. These were the three,” he explained.

He explained further that: “You now have people being giving Ph.D in Business Administration (Management) double honour; Ph.D Business Administration (International Business) and senate decided they should go and bring the letters that offered them admission into these programmes, let’s see the document where they made transition from M Phil to Ph.D status, let’s see their thesis because it will be written there.

Obafunwa said lecturers in the third category were those bagging Ph.D Business Administration (Marketing), adding that there is no programme approved for marketing, neither was there any Ph.D programme approved for Marketing. He said: “What you don’t have, you cannot give. Senate decided that we have to withdraw all these certificates, those that are cleared will get their certificates, new one; areas of double honour will be streamlined and those that do not exist at all will be withdrawn completely and let people do what they need to do to earn that thing.

“So, it was not a case of victimisation of any particular group: initially, everything was borne out of one person who refused to collect her degree. I will be grateful to that person, otherwise, nobody would have known anything. Are we likely to review the same thing in other faculties, maybe? Maybe, yes. We must be bold to look straight to people and take certain decisions, the age of mediocrity and sweeping things under the carpet, the age of people saying to you it is a big family, let’s forget, no, it is over.”

Obafunwa said all these rot could not have occurred without the connivance of some people in the university as the authorities of the school would punish anyone found culpable.

According to him, “Could all these have happened without some level of compromise from within? The answer is yes. We are also looking at that, I don’t want the impression to be given that  focusing on people who might have benefitted in one way or the other from it; no, we are also looking at the system, why should this happened? Who and who allows this to happen?”