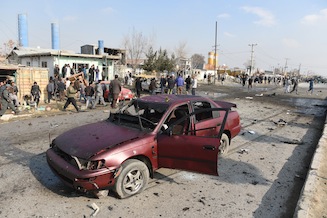 A suicide bomber rammed his explosives-packed car into a British embassy vehicle in Kabul on Thursday, killing one Briton and five Afghans in the latest attack to highlight fragile security as NATO troops withdraw.

A British security contractor and an Afghan employee of the embassy died in the blast, which hit their vehicle on a stretch of road notorious for suicide attacks.

At least four Afghan bystanders were also killed, and more than 30 others were injured.

“I am deeply saddened to confirm that a British national civilian security team member and an Afghan national working for the embassy were killed,” British Foreign Secretary Philip Hammond said in London.

“I condemn this appalling attack on innocent civilians supporting our diplomatic activity.”

A second British contractor with the G4S firm was injured in the bombing, which threw the embassy’s 4×4 vehicle onto its side.

The roof was blown off and car parts scattered across the Jalalabad road, a main route where many fortified foreign compounds and military facilities are located.

It has often been the scene of insurgent strikes, and attacks across the city have increased in recent weeks.

At least seven blasts have hit Kabul over the last 10 days, including attacks on foreign compounds and on a female Afghan MP who was injured in a suicide bombing that targeted her car.

At the site, an AFP reporter saw one badly-shaken foreign passenger talking to Afghan police, asking after his colleagues.

A nearby policeman said that passengers covered in blood had been taken to hospital.

“The report we have received from Kabul hospitals show five killed and 34 wounded in today’s attack,” Kenishka Turkistani, spokesman for the ministry of public health, told AFP.

“The wounded include five children. We don’t record foreign casualties.”

Zarif Khan, a shopkeeper, told AFP: “I was selling groceries when I heard this big bang, and then I saw injured people and pieces of metal all around me.”

The attack — three days after two US soldiers were killed in another bombing in Kabul — comes as US-led NATO forces prepare to end their 13-year combat mission against the Taliban next month.

Fears are growing that Afghanistan could tip into a cycle of violence as the NATO military presence declines, with the national security forces already suffering high battlefield casualties.

Afghanistan suffered its deadliest attack of 2014 on Sunday when a suicide bomber struck at a volleyball match in the eastern province of Paktika, killing 57 people.

The NATO combat mission will finish at the end of this year, with about 12,500 troops staying on into 2015 to train and support the Afghan army and police.

President Ashraf Ghani, who came to power in September, has vowed to bring peace to Afghanistan after decades of conflict, saying he is open to talks with the Taliban, who ruled Kabul from 1996 to 2001.

Ghani finally emerged as president after signing a power-sharing deal with his poll rival Abdullah Abdullah.

Both men claimed to have won fraud-tainted elections in a prolonged stand-off that caused political paralysis in Kabul and fuelled worsening violence nationwide.

Britain hosts a major donor conference on Afghanistan next week in London, and British ambassador Richard Stagg was at a meeting in Kabul about the event when the blast occurred.