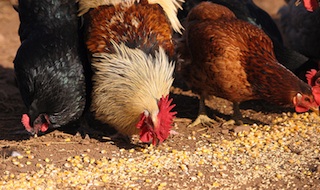 Some 70 per cent of fresh chickens on sale in Britain are contaminated with a food poisoning bug, the Food Standards Agency (FSA) said on Thursday, warning that retailers must raise their game.

A six-month survey of chilled whole birds found that 18 percent also tested positive at the highest level of contamination for campylobacter, the government body said.

None of the major supermarkets met industry standards for reducing the bacteria, which is killed during cooking but still affects 280,000 people in Britain each year.

Most of the cases are caused by poultry and in rare instances campylobacter can cause death.

In February, the FSA began a year-long survey of retail chickens to establish the scale of the problem. Now at the half-way point, it has named and shamed the worst performers.

Supermarket Asda came out top with 78 percent of its chickens testing positive and 28 percent showing the highest levels of campylobacter, defined as more than 1,000 colony-forming units per gram (cfu/g).

Its rival Tesco performed the best, but even then had 64 percent of chickens testing positive and 11 percent recording the highest levels of the bacteria.

“These results show that the food industry, especially retailers, need to do more to reduce the amount of campylobacter on fresh chickens,” said FSA director of policy Steve Wearne.

He added: “There are signs that some retailers are starting to step up to their responsibilities.

“When more do, we will see the sustained improvements that will help prevent many of their customers getting ill.”

Other supermarkets tested were the Co-op, Marks and Spencer, Morrison’s, Sainsbury’s and Waitrose. The market share of Lidl, Aldi and Iceland was considered too small to single them out.

In June, the FSA warned consumers to stop washing chicken as it only spreads the bacteria.