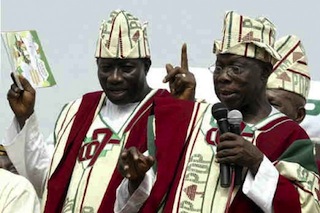 A group ostensibly working for President Goodluck Jonathan has hit back at former President Olusegun Obasanjo who lambasted Jonathan on Wednesday at a book launch in Abuja, Nigeria’s capital.

Obasanjo had pilloried Jonathan, describing some of his policies as evil and deriding the president for failing to tackle Boko Haram insurgency decisively and undermining democracy by harassing the opposition.

Rising in defence of Jonathan, the group, called Nigerians4Change, in a paid advertorial in a national daily on Thursday, said Obasanjo promoted political brigandage during his 8-year tenure between 1999 and 2007.

The group cited the kidnap of the then Governor of Anambra State, Chris Ngige (now a Senator) as an example of such brigandage, adding that elections held in Osun, Anambra, Edo and Ekiti States were nullified under Obasanjo’s watch because the elections were conducted under questionable circumstances.

According to the group, Obasanjo “flouted court orders with impunity. He used kangaroo arrangements to scuttle democratic institutions, while the wind of impeachments swept the land.”

It said unlike Obasanjo’s period, the democratic space has been expanded as court orders are obeyed and the judiciary is  in ascendancy during Jonathan’s tenure.

The group also said unlike during Obasanjo’s era, the Economic and Financial Crimes Commission, EFCC, is no longer a weapon of political vendetta.

Other areas Obasanjo failed during his administration, according to the group, include the failure of his administration to turn around the power sector after investing $16 billion and the fraudulent fertilizer subsidy which Jonathan has now curbed after 40 years.

The group further highlighted Obasanjo’s inability to address infrastructure deficit in tertiary institutions; the former president’s failure to fix bad roads after spending $30 billion and made only 5,000 km motorable, leaving 30,000 km in bad shape until Jonathan came in and fix 25,000 km of roads,  among his poor performance in the health, industrialisation and  housing sectors of the economy.