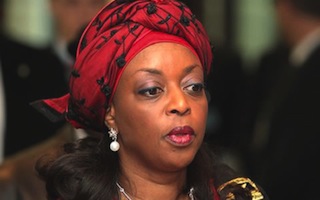 She is the first female to be so elected in the 54 year history of the Organisation.

According to Wikipedia, Diezani (born 6 December 1960) became Nigeria’s minister of transportation on 26 July 2007. She was moved to Mines and Steel Development in 2008, and in April 2010 was appointed Minister of Petroleum Resources.

She was born in Port Harcourt, Rivers State, Nigeria. Her father was Chief Frederick Abiye Agama. She studied architecture in England and then at Howard University in the United States. She graduated from Howard with a Bachelor’s degree on 8 December 1992. She returned to Nigeria and joined Shell Petroleum Development Corporation that year. In 2002, she attended Cambridge University for her MBA. In April 2006, Shell appointed her its first female Executive Director in Nigeria.

Since 1999 she has been married to Admiral Allison Madueke (retired), one-time Chief of Naval Staff who was at various times governor of Imo and Anambra State.

In September 2011 Alison-Madueke was awarded an honorary Doctorate in Management Sciences by the Nigerian Defence Academy, Kaduna.
Diezani Alison-Madueke has held three significant positions in the Nigerian federal government. She was appointed Transport Minister in July 2007. On 23 December 2008, she was named as Minister of Mines and Steel Development.

In April 2010, President Goodluck Jonathan signed the Nigerian Content Act, which aims to increase the percentage of petroleum industry contracts that are awarded to indigenous Nigerian businesses – a reaction to the domination of the sector by foreign operators.

One of the most controversial policies introduced under Alison-Madueke is the government’s plan to remove state subsidies on fuel prices. Alison-Madueke has supported the discontinuation of the subsidy on the grounds that it “poses a huge financial burden on the government, disproportionately benefits the wealthy, [and] encourages inefficiency, corruption and diversion of scarce public resources away from investment in critical infrastructure.”

On working in male-dominated sectors, Alison-Madueke said she warned the young women she mentored while at Shell to “change their mode of thinking.”

In June 2008 Alison-Madueke was subject to a Senate probe after it emerged that as Transport Minister she had paid 30.9 billion naira ($263 million) to contractors between 26 and 31 December 2007. She is said to be worth over a billion naira . However, she has never been charged or tried for these allegations and has strongly denied any wrongdoing.

In September 2008 there was an unsuccessful attempt to kidnap Alison-Madueke at her house in Abuja.

In October 2009, the Senate of Nigeria indicted her and recommended prosecution for the alleged transfer of 1.2 billion naira into the private account of a toll company without due process and in breach of concession agreement. However, the allegations have never been taken to law, and the Minister maintains her innocence.