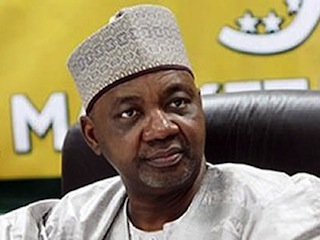 The Federal Government has expressed optimism that with the impressive gains recorded in the fight against the wild polio virus disease, the virus will soon be completely eradicated from the country like the Ebola virus diseases.

Vice President Mohammed Namadi Sambo stated this at a meeting of the Presidential Task Force on Polio Eradication held at the State House, Abuja on Thursday.

“Government will continue to give political support, ensure sustained funding of the programame, procurement of the polio vaccines and support the introduction of other new vaccines and work with the traditional, religious leaders, development partners and other community based organizations, to ensure that no polio case is recorded in Nigeria,” Sambo said.

He commended the Commissioners of Health in various States, Local Government Chairmen, traditional rulers, especially His Eminence the Sultan of Sokoto and the Shehu of Barma for their commitment to polion eradication in Nigeria as demonstrated through the Northern Traditional Leaders Committee on Primary Health Care (NTLC).

He also commended bodies such as Aliko Dangote Foundation, Bill and Melinda Gate Foundation, the World Health Organisation and other partners for their unwavering support towards eradication of the virus.

Sambo expressed delight that in the last two years no new case of the virus has been recorded in Nigeria while immunization of 88 percent has been achieved in 2014, noting that the country has greatly improved this year compared to other parts of the world where polio is still a problem.

He also noted that the task is enormous but urged all stakeholders to continue to work collectively in order to achieve result especially in the areas where there is security challenge and other risk factors. The VP also urged partners to work together with Nigeria for the success of radication of other diseases such as measles, whooping cough and diarrhea.

Earlier, the Supervising Minister of State for Health, Dr Khaliru Alhassan while giving an account of the efforts to eradicate polio and the challenges, noted that, the Wild Polio Virus is now confined to only five LGAs compared to the more generalized situation of the past. He added that Nigeria now have six cases of Wild Polio Virus while 96 per cent of the 774 local government areas have been polio free in the last one year.

The Executive Secretary of the National Primary Health Care Development Agency, Dr. Ado Mohammed, delivered a power point presentation where he expressed confidence in the efforts of the three tiers of governments to eradicate the polio virus.

Yobe State Commissioner of Health also said the only one virus identified in the state is confined to a ward and assured of its eradication. All stakeholders were encouraged to sustain the achievement by constantly immunizing children especially at the border towns to avoid the importation of same to the country.

Present at the meeting were Governor Alhaji Isa Yuguda of Bauchi, the Deputy Governor of Kaduna State, Dr. Nuhu Bajoga and representatives of World Health Organisation and UNICEF.