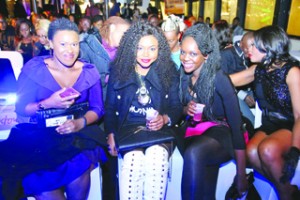 •Uche Jombo and other actresses at New York premiere of Folly

After the successful United States premiere of Folly, a film produced by Elizabeth Daniels, and featuring Joke Silva, Uche Jombo and Yvonne Nelson are set to take over Nigerian cinemas with the job.

Directed by Alex Mouth, Folly tells the melancholic story of love and sweet life gone sour. It highlights the thin line between promises and betrayal, how a harmless, thoughtless action can alter lives forever.

On 1 November, Folly was premiered in New York and the following day, it was also premiered in DC, all in the United States. The movie got a huge applause and rating from the audience, including White movie buffs.

Uche Jombo, Yvonne Nelson and Alex Ekubo were among the Nigerian movie stars who made it to the States for the premieres.