Hollande to be first Western leader in Ebola-hit Africa 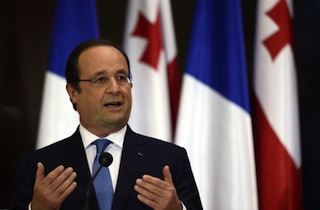 French President Francois Hollande will become the first Western leader to travel to a country hit hard by the deadly Ebola virus on Friday when he makes a brief visit to Guinea.

The west African nation has lost 1,200 people to the disease which has killed some 5,700 across the region and infected 16,000, according to the World Health Organization.

The visit, the first by a French president since 1999, has been touted as a bid to deliver “a message of solidarity” to Guinea as it battles the worst outbreak of Ebola since the virus was discovered in 1976.

France has pledged 100 million euros ($125 million) as a contribution in the fight against Ebola, focusing its efforts on Guinea.

The money is due to help with financing several care centres as well as 200 beds, some of which are reserved for health workers caring for the sick.

France has also pledged to set up two training centres for health workers, one in France and one in Guinea. In addition, French biotechnology companies will set up rapid diagnostic tests in Africa.

Hollande will visit healthcare facilities, participate in a round-table discussion on Ebola and hold talks with his Guinean counterpart Alpha Conde.

The French leader will also sign a cooperation agreement with Guinean authorities for the creation of a Pasteur Institute in the capital Conakry by the end of 2016, the global medical research organisation said on Thursday.

The centre will focus on arboviruses, transmitted by ticks, and viral hemorrhagic fevers such as Ebola, Lassa fever and Yellow Fever, said Brechot Christian, managing director of the Pasteur Institute.

Guinean President Alpha Conde on Wednesday said the use of force was entirely justified in battling the deadly Ebola outbreak.

“There are still people who think Ebola is fiction,” Conde told a news conference in a country where an eight-member Ebola education team was murdered by angry villagers in September.

“We have an agenda which is to finish with Ebola as soon as possible and in Guinea this is possible,” he added.

“If people don’t want to be treated we will use force because we won’t allow the illness to spread despite all our efforts.”

Bu press advocacy organisation Reporters Without Borders, has recently voiced concern about the attacks on press freedom under the pretext of the fight against Ebola.

The campaign group, known by its French initials RSF, urged Conde on Thursday “to ensure that the right of Guinean citizens to free information is respected”.

The Guinean opposition coalition this week denounced the lack of consultation by the government over its strategy for fighting Ebola.

“The social, political and economic crisis in which our country is immersed could lead — due to the refusal of dialogue by public authorities and their propensity to violate the constitution and laws of the republic — to a confrontation with unpredictable consequences,” it said in an open letter to Hollande.

Conde, who became the former French colony’s first democratically elected president in 2010, is due to make way for elections next year.

Hollande is due to travel later to the Senegalese capital Dakar to take part in a summit of French-speaking leaders that is likely to be dominated by the Ebola crisis as well as the recent unrest in Burkina Faso.