I want to save Nasarawa from misrule of APC, says Labaran Maku 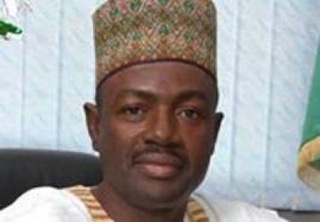 Labaran Maku, former Minister of Information, has promised to save Nasarawa state from the misrule of the ruling All Progressives Congress (APC) and transform it into a modern city if elected as governor of the state in 2015 general election.

Maku made the pledge on Friday while addressing delegates of the party in Nassarawa-Eggon, Akwanga and Wamba Local Government Areas of the state.

According to him, “my government will utilise our proximity with the federal capital to create the modern infrastructure in order to attract investment and boost the revenue base of the state'”.

He also promised to restore peace and engage the youths meaningfully in a manner that they will have no time to cause problem in the state.

He urged the people to return the state to mainstream national politics by voting for the Peoples Democratic Party at all levels during the 2015 general elections.

He said because of the proximity of the state to the Federal Capital Territory, Abuja, the state could not afford to remain in the opposition.

He said the state had benefited tremendously from the Federal Government in terms of employment and physical development, hence the need to reciprocate by voting for PDP in all elections in 2015.

He told the delegates that he was offering himself to serve the state following the “clarion call” on him by the people to save them from the misrule of APC in the state.

He said the raging skirmishes in the state had nothing to do with communal violence but a plot by the APC to displace some voting communities in order to retain power in 2015.

He however enjoined the people to resist the manipulation of the APC by securing their Permanent Voter Cards (PVCs) as the tool to be used to vote the Al-Makura-led government out of power.

Maku said unlike in the past where delegates were only used for primary elections, he promised to integrate them into his government when elected, to give them a sense of belonging.

He said the party needed a formidable candidate with mass support of people across all social and ethnic groups to confront and defeat the APC in Nasarawa State.

He said he had acquired the experience and exposure to lead the state to peace, prosperity and development, which eluded it since the advent of the APC.

He pledged to judiciously manage the resources of the state when elected, to give all segments of the society the opportunity to benefit from the dividends of democracy.

He also promised to lead a peaceful campaign devoid of rancour and acrimony and appealed to the youth to shun all forms of violence during and after the election.

He said having remained consistent in the PDP since 1999, he was confident of clinching the party’s ticket and lead it to victory in 2015.

He therefore welcomed the open contest for the governorship ticket in the party and promised to carry all other aspirants along when he emerged victorious in the primaries.