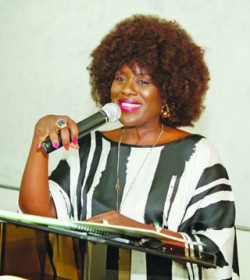 It was at the October edition of the monthly Filmmakers’ Forum of the Nollywood Studies Centre. The topic was, Beyond the Glitz: An Acting Career Built on Sweat, Tears and Professionalism, and the guest speaker was Joke Silva.

The seasoned thespian had arrived punctually, looking very much the part for the topic. Exuding elegance in a black and white Remy Lagos outfit and sporting an exuberant Afro, Silva appeared every inch the glamorous actress. Relaxed and dishing out to everyone her usual wide and pleasant smile, she conveyed a sense of ease that belied the reality of the hard and often challenging work of the professional actor. One of the challenges is how to create a believable fully fleshed out three-dimensional character.

It was clear from the very beginning of the Forum that characterisation for Silva is not something superficial. When she plays a role on stage or in a film, she lives the life of the portrayed character. This came through in her explanation for the generous Afro wig she had on. She had just finished playing the role of an older woman, she said, and was about to take up the part of a much younger character in another production. Her wearing of the wig was to help her break out of the previous role and enter into character for the new role. In not so many words, Joke Silva made it clear that the body of the actor is the canvass on which the film/stage character is drawn and made to come to life. The actor must encapsulate the personality of the character and give it being.

After taking a quick survey of the members of the audience to find out which of her films they had watched, Silva spoke about her acting career by describing the challenges involved in bringing to life the characters she had played in the different films.

One of the truly memorable characters for her was Mama Tega in Amaka Igwe’s Violated. Being quite young at that time and of a rather petite stature, the challenge was to convincingly play the part of a much older person, a powerful and domineering matriarch. But she pulled it off. Among other things, she built up a profile of Mama Tega based on the characters of the different older women that she knew. She also paid particular attention to her costume and make-up, both of which she handled herself. The portrayal was so successful that people that met her, after having watched Violated, could hardly believe that she was the same person.

But such successes do not come easy. Silva shared with the audience her experience of the gruelling years she spent studying Drama at the Webber Douglas Academy of Dramatic Art in the UK. Among other things, the course involved intensive training in acting, movement and voice. The training was such a demanding one that she actually contemplated dropping out at some point; but she stuck with it. But it was so tough that she lost a lot of weight – to the point that when she returned to Nigeria at the end of it all, her father threatened to take action against the school. But the rigour of the training, Silva says, has paid off. It has served to give depth to her acting. The message she puts across is clear: anyone that wants to do well as an actor must be willing to put in due effort.

Exuding a true passion for her profession, the award winning actress stated, “I am wired for acting.” Her love for acting goes back as far as her childhood, she stated, when she would convince her friends to stage little dramas for visitors to the family home. In spite of the more or less prevalent view in society of actors as never-do-wells, her father and mother, a lawyer and doctor respectively, gave her their full support from the very beginning. But her decision to take up acting as a profession, she states, was based on the fact that, after duly praying about it, she saw it as God’s will for her. As a consequence, she has always striven, she said, to ensure that every step in her career is in line with what God wants of her.

In response to one of the questions asked by members of the audience, Sylva spoke about how she and her husband, Olu Jacobs, are trying to contribute to the training of young actors at the Lufodo Academy of Performing Arts. The Academy offers practice based training and participants are prepared for work in theatre, film and television.