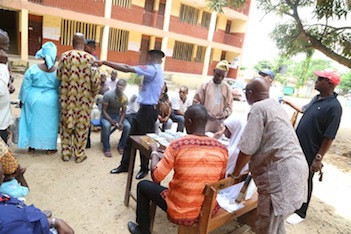 The government said the cancellation of the exercise would also enable Lagosians to fully participate in the ongoing collection of PVCs and registration exercise.

INEC had said it would distribute PVCs in the remaining nine local governments in Lagos as from tomorrow till Sunday.

Commissioner for the Environment, Tunji Bello, said the decision to cancel the exercise is to assist INEC officials in their logistics, as they would require to move men and materials to different parts of the state.

“This cancellation is also to allow Lagos residents who have either not collected their Permanent Voters Cards to do so, as well as allow those who have not registered to do likewise.

“You may recall that the governor, Babatunde Fashola, raised the alarm that there were wide discrepancies in the number of figures claimed to have been registered in Lagos against the last registration exercise. INEC eventually set aside November 28-30 for distribution.

“You will also recall that a lot of Lagos residents’ names were either missing, some could not locate collection centrer or have changed their residence and so on. In order not to disenfranchise all these categories of people, the Lagos State Government has therefore lifted the restriction of movement in order to allow free movement of people to their various registration and collection centres,” he said.

The commissioner said  “law enforcement agencies including Nigerian Police, Civil Defence Corps and officials from KAI, LAWMA, LASTMA are hereby requested to allow access for all Lagosians in order to fully participate in the registration and collection of voters permanent cards in Lagos State,” he added.