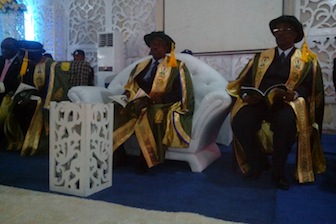 Twenty-eight students among the graduands today came out in flying colours as they graduated with first class degrees. Along with the graduating students, five eminent Nigerians were awarded with the honorary awards by the institution as part of the activities marking the three-day ceremony.

Addressing the graduands, parents and the people of Ogun state, Visitor to the institution and governor of the state, Ibikumle Amosun declared that the cries surrounding the scrapping of the institution has been laid to rest, proclaiming that, “TASUED has come to stay.”

Amosun posited that in less than 10 years of establishment, the institution has continue to become a great and leading academic institute and one of the leading tertiary institutions in the country.

He urged the graduating students not to regard their certificate as a mere paper, “but as a ticket to serve the state and the country at large.”

Amosun urged them to be an agent of positive change, “especially, as we are preparing for the 2015 general elections”.

Delivering her welcome address at the event, the Vice Chancellor of the institution, Prof. Oluyemisi O. Obilade charged the graduating students to see themselves above ordinary graduating students but as people the society will depend upon as game changers, who can replicate the transformation that hydraulic fracturing has made the economy of some leading nations.

“The future of TASUED depends on you because our society will ask you to fulfill your responsibilities as leaders in a variety of fields for further promotion of inquiring minds obtained from basic and applied research as part of intellectual creative activities nurtured at this great university of education. I want you to become a great inspiration for others, lead your lives as working people, active in front line companies, as educators nurturing next generation personnel institutions.

“I plead with you to always endeavour to promote a culture of personal responsibility, dignity of work, value of education, merit of service and devotion to a cause greater than yourself. Have confidence in your skills and use the good opportunity that you were offered to help others who are not so privileged. Do not allow yourself to be misled into believing that wealth, power and status are the only things that will bring you happiness in life, instead, treasure personal integrity, family, good friends, truth and compassion,” Obilade advised.

According to him, “Eighteen programmes of the university have been fully accredited while the remaining three are on interim. Also, the National University Commission, NUC approved the commencement of the degree of Masters in Education (M.Ed) in 17 programmes after the successful resource evaluation visit to TASUED. The institution was accorded national recognition by the NUC and was listed among the few universities approved to run part time degree programmes.”

He expressed appreciation to parents for investing heavily on their children. He charged his colleagues to start thinking of how to repay them back.