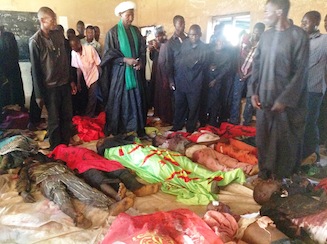 An estimated 64 people died in the multiple explosions in Kano Grand Mosque today, according to preliminary casualty figures released by an official of one of the rescue agencies.

The official, who requested anonymity as he was not authorised to speak to media, said 64 bodies had been brought to just one Kano area hospital after the attack at the city’s central mosque, and the wounded figure reflected statistics from three hospitals.

The bombs exploded in the mosque attached to the palace of the Emir of Kano, Mohammed Sanusi, a week after he issued a call to arms to fight Boko Haram.

The explosions came after civilian vigilantes in the northeastern city of Maiduguri said they foiled a bomb attack against a mosque, five days after two female suicide bombers killed over 45 people in the city.

“Two bombs exploded, one after the other, in the premises of the Grand Mosque seconds after the prayers had started,” worshipper Aminu Abdullahi told AFP.

“A third one went off in a nearby road close to the Qadiriyya Sufi order. The blasts were followed by gunshots by the police to scare off potential attacks.”

His account was backed up by another witness, Hajara Tukur, who said she lives nearby.

The emir, known officially as Muhammad Sanusi II, last week said at the same mosque that northerners should take up arms against Boko Haram, which has been fighting for a hardline Islamic state since 2009.

He also cast doubt on Nigerian troops’ ability to protect civilians and end the insurgency, in rare public comments by a cleric on political and military affairs.