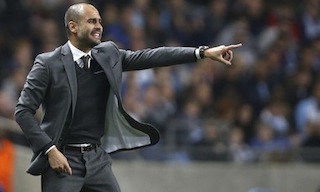 Bayern Munich chairman Karl-Heinz Rummenigge says the Bundesliga leaders are eager to extend coach Pep Guardiola’s contract after describing the Spaniard as the “best coach” for the Bavarian giants.

“He is the best coach that could have happened to Bayern Munich,” Rummenigge told reporters at the opening of the club’s new merchandise store in Berlin.

“He’s a wonderful person with whom it is great fun to work with, I hope he stays with us for as long as possible.”

In his first year in charge, Guardiola won last season’s Bundesliga title with a record seven matches to spare, as Bayern went on to claim the league and cup double, and is under contract until 2016.

But Rummenigge says he will tread carefully with Guardiola, 43, who has won 18 titles as coach of either Barcelona or Bayern.

“I know him, he’s not the sort of person who wants to extend his contract early or values a long-term deal,” he said.

“I won’t annoy him with it and I know when the right time will be to have that conversation.

“It’s not something that will happen in the near future.”

Bayern began the weekend seven points clear in the Bundesliga before Saturday’s match at Hertha Berlin in the Olympic Stadium which will host the Champions League final on June 6, a week after the German Cup final is also held there.

They suffered their first defeat of the season at Manchester City in midweek, but are already through to the last-16 of the Champions League as group winners.

“Our primary objective is to defend the German league title, it’s the most honest title to defend as you need luck for the others,” said Rummenigge.

“It would be great to come back to Berlin twice at the end of the season, but I wouldn’t be so presumptious to suggest that.”

Bayern are officially the world’s biggest club with just over a quarter of a million members, meaning they have overtaken Lisbon’s Benfica, which has 235,000 members with Barcelona third in the rankings with 177,246 members.

“In Germany, we may be the market leaders in football, perhaps even in all sports,” said Rummenigge.

“But I think there is still potential to expand in other countries.”

“At the moment, the situation is very, very good at Bayern Munich and what is happening on the field helps.”